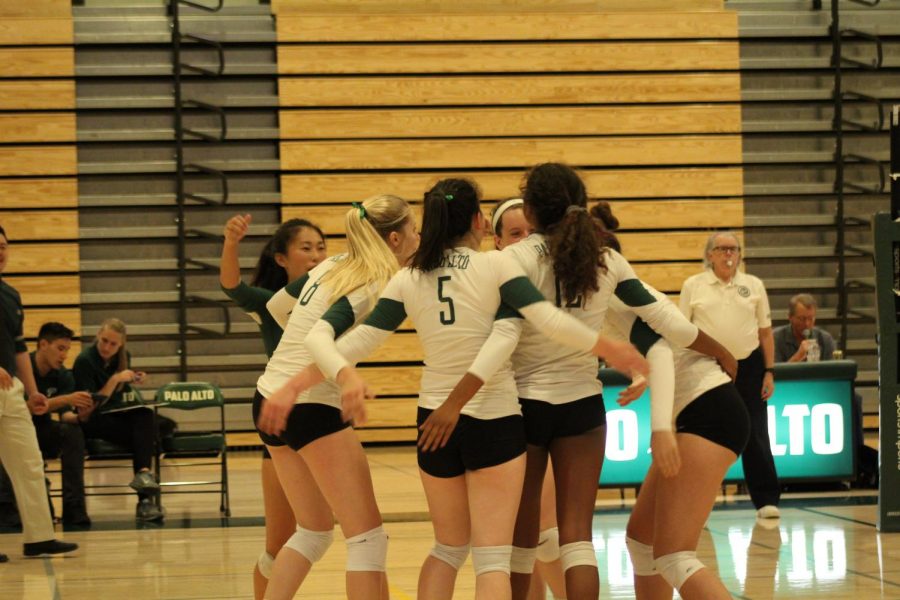 In previous years, the Mustangs have been difficult to beat. This time around, however, the Vikings prepared themselves mentally to face this tough rival.

“They had a record, so going into the game I knew that my team was a little bit nervous about that,” senior right-side hitter Siena Brewster said.

“All of our nerves went away once we hit the court, and it just went back to our muscle memory and what we do at practice,” Brewster said.

The team started off strong in the first and second sets, working well together with tough offense and defense. Junior Libero Rebekah Limb put up a strong defense, passing the ball with control despite challenging offense by the other team. The Vikings’ offense, led by Brewster and junior middle blocker Amelia Gibbs, was unstoppable, as the Vikings’ efficiently managed to clinch all three sets.

“Definitely as a team we just really clicked, and our team chemistry was on,” sophomore outside hitter Sophia Krugler said.

The third set was the most competitive, with the Vikings trailing behind Homestead by a couple of points. At first, the team struggled with lots of net balls and miss hits, but after a streak of stellar defense and offense, Paly soon regained the lead. Freshman Hillary Cheung hit a series of hard serves, that the Mustangs struggled to return. The hard hits leveled by the Mustangs were blocked by senior outside hitter Mallory Kuppe and middle blocker Ashlyn Callan, giving the Vikings a small lead. One last spike by Krugler sealed the victory, making the Vikings triumphant in their first league match of the season.

“They [Homestead] are good,” head coach Benjamin Saetang said. “If we didn’t buckle down and actually do the correct things on our side, they could have beaten us.”

The team, thrilled about its first league win, and looks forward to the season ahead.

“I think we did encounter some tough moments in our game,” junior Ashley Xu said. “In the end, we banded together as a team, and we pushed through.”

The team’s next match is against Monta Vista on Tuesday at 6:45 p.m in Cupertino.