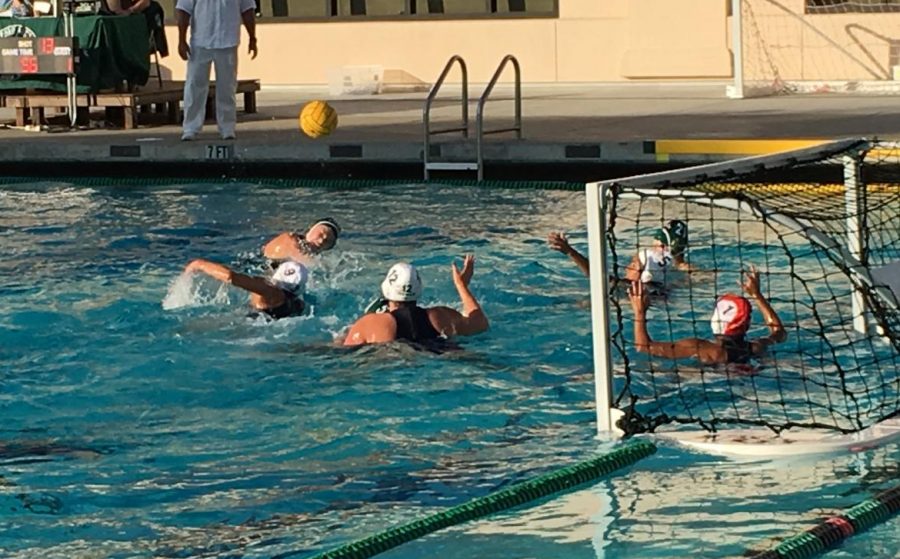 A Palo Alto High School varsity girls' water polo player takes a shot against the Menlo Knights at home on Aug. 29. Although Paly fell to Menlo 7-9, Wilburn has high hopes for the rest of the season based on the team's record from last year. "Last year they [the girls' varsity water polo players] went to the Division One Semi-finals, so if they can build on that, obviously the next step would be the championships," Wilburn said. Photo credit: Ryan Wisowaty

A month into the 2018-2019 school year, Palo Alto High School fall sports are ramping up with an abundance of young talent and high hopes for the season.

Paly’s football team kicked off its season with a victory against Burlingame High School on Aug. 17, the team’s first win with the new coach, Nelson Gifford, Class of ‘99. Athletic Director Therren Wilburn said he’s looking forward to seeing the team grow and develop under the new leadership.

The cheer team also looks to make a strong showing. Led by second-year coach Lea Santini, the team will enter traditional competition in spring, according to Wilburn.

As cheer looks to rejuvenate an older program, a brand-new one is beginning — girls’ field hockey. Coach Jenny Crane is training students and preparing for the varsity field hockey’s first game, an away match against Saratoga on Sept. 24.

“They [the players] are learning every day,” Wilburn said. “She [Crane] said the team is progressing really well, so I’m definitely excited to see them get that first win ever in the program’s history. Twenty years down the line, that’s what we’ll be talking about.”

Many varsity sports this autumn have received an influx of underclassmen after veteran players graduated.

Varsity girls’ tennis is in a similar situation, with many skilled underclassmen playing. The team, which is competing in the El Camino Division this year after dropping down from the De Anza League, hopes to regain their place in the upper league with a successful season.

“We’re looking to get back into the De Anza League and hopefully win that down the road with all this young talent that we have in the program,” Wilburn said.

Varsity girls’ volleyball not only has nine new players, but also a new coach, Benji Saetang.

“I think they’ll be ready for CCS competition when it comes around,” Wilburn said.

Another team aiming for a CCS title is girls’ water polo, which hopes to build on momentum developed in the Division I semifinals last year.

“Coach [Doug] Stotland, he’s in his second year, and I think what he’s built out there on the pool deck is just a great vibe and environment,” Wilburn said.

“They [the Look brothers] have been working together out on the pool deck and the boys have really bought into the program vision and their mission,” Wilburn said. “They [boys’ water polo] are going to probably be a force to be reckoned with in their league.”

The largest sport in the athletics program is cross country, with between 130 and 150 members participating on a given day, according to Wilburn.

“Consistently, for the last two years, student athletes have cut their PR’s [personal records] down so I’m looking forward to that,” Wilburn said.

For more information about Paly Athletics, visit the department’s website.