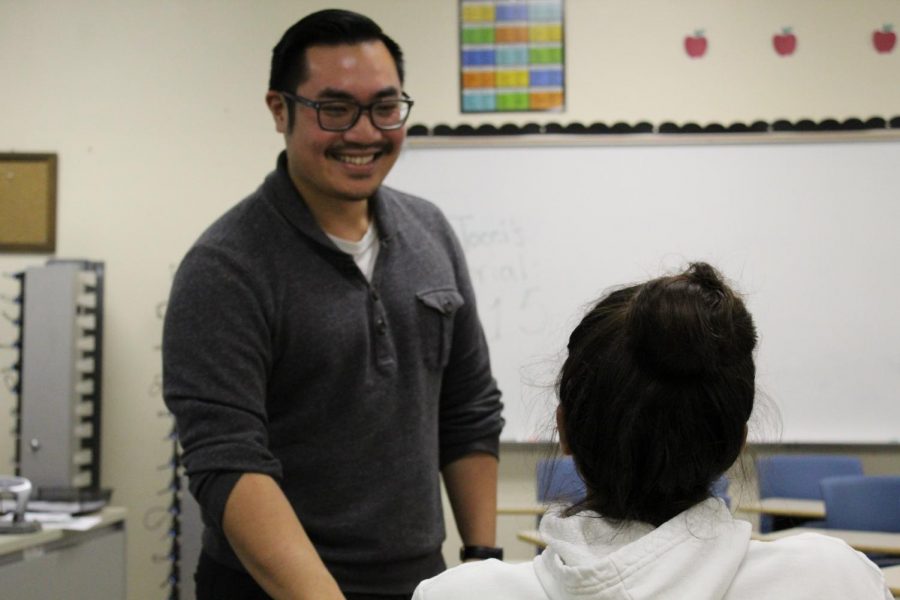 New AP Lang teacher George Vuong, discusses his favorite part about teaching the class and what he's most looking forward to in the upcoming year. "The kids come in and it's fresh and it's new and it's exciting," Vuong said. "It makes my job better because it’s easier to get them through the material if they’re actively interested" Photo: Margaret Li

Advanced Placement Language, one of the many new classes offered at Paly for the 2018-2019 school year, has drawn the interest of over 400 students who are enrolled for the course this year, and caused a 1/3 class-size reduction in certain class sections, according to junior guidance counselor Susan Shultz.

The introduction of the class, which is offered to both juniors and seniors, has provoked a 25 percent drop in enrollment in AP Literature and an even bigger one in multiple elective classes offered to upperclassmen, according to AP Lang teacher George Vuong.

The addition of the class and the large enrollment can be credited to students who have asked for more AP humanities classes over the years, according to the head of the English department Shirley Tokheim.

“Students have asked for additional APs in the humanities for many years,” Tokheim said. “Many students have also wanted an alternative to AP Literature. AP Lang is a fabulous course — and this year’s AP Lang team is amazing. I think this year students chose to take AP Lang over electives because of the recent board decision to report weighted grades on transcripts. AP Lang is a weighted course, so it shouldn’t be too much of a surprise that students chose AP Lang over unweighted electives.”

The drop in enrollment in AP Lit seems to only be a temporary occurrence, according to Tokheim.

“I think the drop is temporary — I predict that signups for AP Lit will go up for next year, since most students taking AP Lang this year are juniors, and after succeeding in AP Lang as a junior, it would make sense for them to feel prepared for—and sign up for— AP Lit,” Tokheim said.

The class is being taught by five teachers, none of whom have taught an AP course before, according to AP Lang teacher Hunter Reardon.

Vuong, who is also a sophomore English teacher, said he’s enjoying teaching the class thus far and the overall reaction from the students.

“The kids come in and it’s fresh and it’s new and it’s exciting, so there’s already this initial buy-in from them, and they’re all really interested in it,” Vuong said. “It makes my job better because it’s easier to get them through the material if they’re actively interested, which I really like to see, especially from the get-go.”

One concern of some students is whether the class material will be repetitive. The majority of the seniors who have signed up for the course have already read “The Great Gatsby,” a book that students usually read during junior year, and which has now been established into the reading curriculum for the AP Language class this school year. This has created a confusion about what material that will be taught to the seniors if the juniors end up reading the novel.

According to senior Ria Vora, the issue of what seniors will read this year is causing confusion for many students.

“We read ‘Gatsby’ last year, so I would have preferred to have the experience of analyzing a new book I hadn’t read before,” Vora said.

According to Vuong, there have been discussions within the English Department about what material will be taught to both juniors and seniors, and how they’re going to make the class as interesting as possible.

“We talked about this during our meetings and there are other books we can read that aren’t ‘Gatsby’ because a lot of students have already read that,” Vuong said … We decided to read ‘Gatsby’, it’s such a good read that if you look at it through a different lens, it’ll probably still be interesting. Rather than how can we look at ‘Gatsby’ in all these thematic elements that are catered towards imaginative literature, we just switch it and reverse it and analyze it rhetorically.”

When considering the mental health aspects of adding the new AP course to the class selection, the line between supporting student’s mental health and rewarding them for taking a heavier work course tends to be a challenge, according to Tokheim.

“We can suggest students take fewer APs, but when our Board of Education decided last year that the high schools would report weighted grades, the decision rewards students who take multiple AP courses,” Tokheim said. “It’s definitely a challenge to support students’ mental health while also rewarding them for taking multiple AP courses.”