New assistant principal talks about his previous career in science and favorite pastimes. 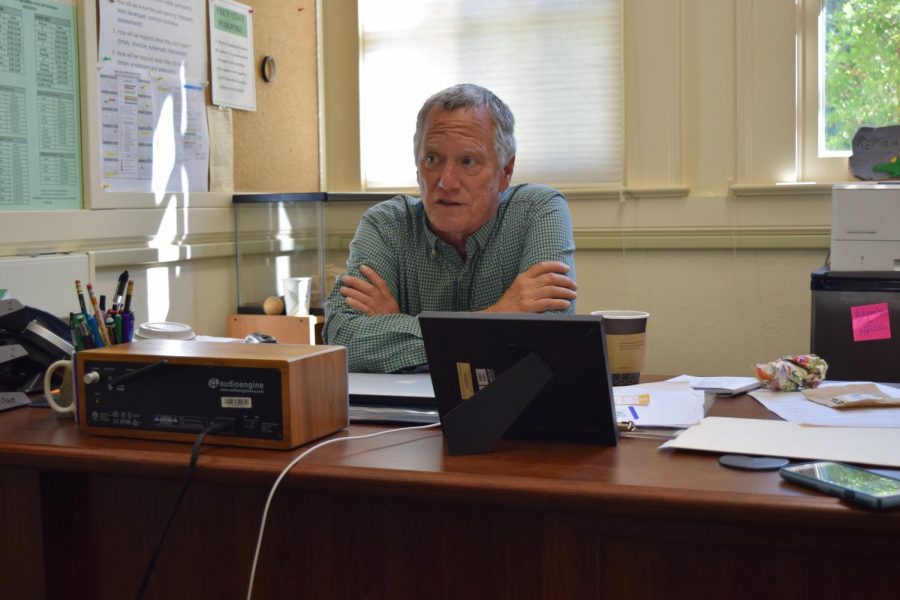 The Paly Voice sat down with new Assistant Principal Tom Keating to learn more about his journey from evolutionary biology to high school administration and find out his mission for the school year ahead.

Keating is one of two new Assistant Principals of Teaching and Learning, both of whom will be responsible for discipline and day-to-day operations. His co-worker, John Christiansen, will take the lead in the English, Special Education and Visual and Performing Arts departments, while Keating will focus on Math, Career-Technical Education and Science.

“I’m here to help think about the next generation science standards, which are really coming to the forefront this year,” Keating said.

Keating’s love for the sciences has its roots in his early career as a marine biologist.

“I started out life in science,” Keating said. “My first job was at the California Academy of Sciences working in the ichthyology [fish] department.”

Keating has also worked on the Galapagos islands as a researcher and curator and in southeastern Alaska fisheries. He didn’t discover his love of teaching until he became a teacher’s assistant while getting a master’s degree at Moss Landing Marine Labs.

“One of the professors went on leave, and they asked me to teach a course, so I got to teach at graduate level course …. which was really fun and inspiring and that sort of set the course for me for teaching,” Keating said.

Struck by his newfound passion for sharing his knowledge, Keating moved to Hollister and joined a teacher intern program.

“I didn’t have any formal training, so they assigned me a couple mentors from the district,” Keating said. “They were terrible. But there were three teachers on their own that took me under their wing and that was the greatest. I learned so much from those guys. … I think one of the most powerful ways for learning is mentoring.”

After two years in Hollister, Keating earned his teaching credential.

“You could teach for two years, and they would give you a teaching credential, so I didn’t have to go to school to be a teacher,” Keating said. “I thought I’d go teach for a couple of years and then go back to science, but I found out that I really liked it.”

After eight years teaching math, science and computer-related courses, Keating decided to pursue a Ph.D. in science and education from Stanford University.

“This was right when the World Wide Web was happening, so it was quite an interesting time,” Keating said. “I did a dissertation on the electronic community of teachers using different … social media to collaborate on curricular projects.”

It was during his four years at Stanford that Keating’s relationship with Paly began.

“I also was in a teacher education program supervising teachers, some of which were here [at Paly],” Keating said. “I used to come here to help teachers learn how to be teachers.”

For Keating, the decision to return to Paly as an administrator was an easy one.

“I like working at schools, and I’d also worked with Mr. Paulson,” Keating said. “He was a principal in San Carlos when I was a director there. So we’ve worked together, and I really have great admiration for him.”

According to Keating, despite the recent changes in administration, the transition to Paly has been smooth.

“It’s a great team,” Keating said. “I’m really enjoying it, because everyone is really experienced, and everybody brings different expertise to the table. We all work together on trying to solve problems.”

Keating said he is committed to visiting science and math classrooms to gain a better understanding of student and teacher experiences.

“I’ve been impressed with the science faculty so far,” Keating said. “One of the first things I did and I would be encouraged to do is spend time in classrooms. Mr. Paulson has that as a high priority. One of the dilemmas of being an administrator is you spend so much time putting out fires that you never get out into the classrooms to see teachers and students, which is really the most interesting part.”

When he isn’t classroom-hopping or fulfilling his other Paly duties, Keating can be found traveling across the globe.

“I just got back from Europe where we spent a week in Stockholm visiting some old friends, went on a cruise for a week in the Baltic, went to Russia, and we went to Copenhagen and spent some time there,” Keating said.

Keating also enjoys music, a love that has its roots in his high school years.

“I was a disc jockey in high school way back when we had disc jockeys playing records and people calling up,” Keating said “I’m really into blues, folk, country, old things — probably 1975 — back to the beginning of the century.”

The stacks of books in Keating’s office hint at another one of his passions: literature.

“I’m reading Moby Dick — well, rereading it,” Keating said. “I read it when I got out of college many years ago. So I’m revisiting the classics. It’s about whales.”

As for Paly, Keating said he is most looking forward to watching the school grow and develop in the coming years.

“I’m really interested in culture, and how we grow as a school,” Keating said. “We’re evolving, and I’m an evolutionary biologist, so I’m interested in participating in the evolution.”