New assistant principal discusses his journey to Paly, passion for mental health and hobbies outside of his career. 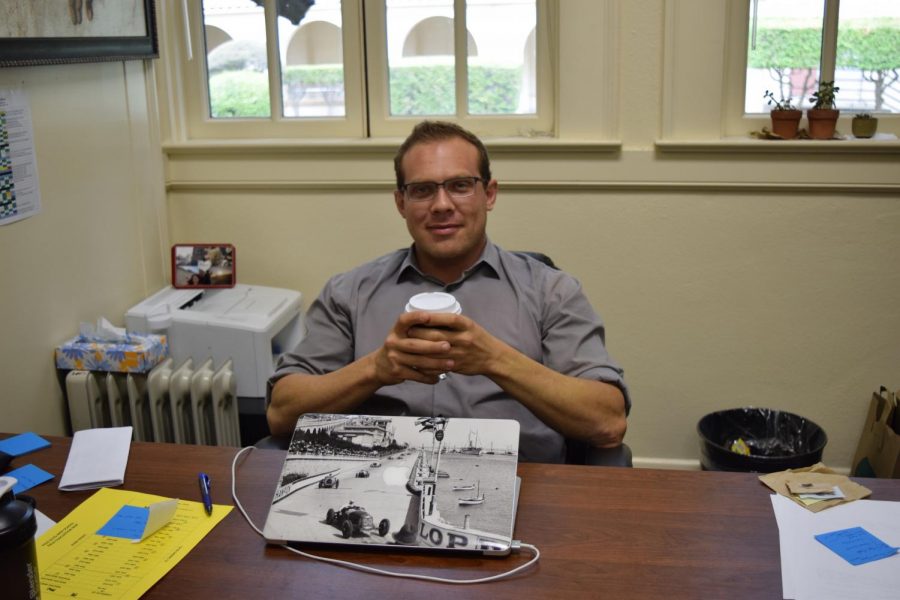 Assistant Principal John Christiansen enjoys a cup of coffee while discussing his transition to Palo Alto High School, his responsibilities at Paly and his passions outside of his career. Although part of the school's administration team is new this year, Christiansen said that consistency to years prior can be expected. "Our principal's mission is to keep things steady, keep things consistent and really build on our roots and foundations," Christiansen said. "The bell schedule is different ... but really that's the only thing that should be changing."

This is the 13th installment of Coffee Chats, where The Paly Voice gets to know staff members over a cup of coffee or tea.

The Paly Voice sat down with new Assistant Principal John Christiansen over a half-caffeinated black coffee to learn more about his path to Palo Alto High School and his vision for the upcoming school year.

As an Assistant Principal of Teaching and Learning, Christiansen oversees attendance and discipline as well as the English, Special Education and Visual and Performing Arts departments.

Christiansen said he hopes to contribute to the Paly community as much as possible.

“My role … is to support students in the community, and create a school culture that’s positive, full of learning and all that good Paly stuff,” Christiansen said. “ [I want to] maintain that, keep people safe, but at the same time, have fun with it … Whatever ways I can give back to you guys, your community and your families, that’s my mission.”

Despite being new to Paly this year, Christiansen is familiar with the Palo Alto Unified School District, having worked at Henry M. Gunn High School counselor during the past school year. Christiansen, who is originally from Colorado, said he was drawn to Palo Alto after a cluster of suicides struck the community.

“I wanted to be involved with the suicide prevention stuff because I was a counselor,” Christiansen said.

According to Christiansen, after gaining his administrator credential, he applied for the open assistant principal position at Paly and was fortunate enough to get his “dream job.” This year, he will continue his suicide prevention efforts using Paly’s myriad resources for student wellness.

“The best suicide prevention strategy is a comprehensive one, and we already have systems that are in place that are really good for that,” Christiansen said. “Nothing needs changing. We just need to keep supporting those departments and keep giving them the enthusiasm and the recognition that they deserve.”

According to Christiansen, maintaining a strong support system for struggling students is the best step toward improving mental health.

“People who are more connected with friends and with their families … have lower incidences of mental health problems, one of those being suicide,” Christiansen said. “It may sound cliche, but happy, connected young people … stay healthy. That’s what we’re trying to do.”

Having attended a high school similar to Paly, Christiansen is no stranger to highly competitive academic environments.

“I come from a really similar community … to Paly,” Christiansen said. “[It was] much smaller, but really high academics, really high pressure … It’s the high stakes stuff. I’m pretty used to that because I grew up in it.”

As for himself in high school, Christiansen said he was “awkward” and “not cool at all.” However, he thrived in school and found an interest in unique philosophical topics.

“They’re not subjects that are taught in school, but consciousness, the nature of reality and spirituality, those really heavy concepts, those were my favorite subjects,” Christiansen said. “If you look down on everything from those levels of thinking, you start to see how similar math is to English and science. They’re all kind of the same thing.”

Christiansen said he looks forward to building relationships with his new co-workers and experiencing everything that Paly has to offer, including “new relationships, new opportunities, new growth [and] new learning.”

“So much of it is like new and fresh and green – literally green – but that’s the piece I love,” Christiansen said. “That’s why I’m in education, because I love learning and trying to help foster that enthusiasm.”

Christiansen had nothing but praise for the Paly campus and community.

“The buildings are gorgeous,” Christiansen said. “The students are … friendly, supportive, and everybody works super hard, but also it seems [everyone] … can appreciate chilling out and relaxing and finding that balance … Life’s about balance.”

Christiansen finds his balance outside of the school environment by focusing on his hobbies, which include working out, listening to music and making pottery.”

When at home, Christiansen enjoys spending time with his pet cat, Ghostface, who he said is “trained like a dog.”

“He comes when I call him, and he sits and speaks and does all these things,” Christiansen said.

Christiansen also enjoys outdoor activities, such as skydiving. Although he has only been twice before, Christiansen said one of his goals this year is to get a skydiving license.

“It [skydiving] is amazing and scary at the same time,” Christiansen said. “So I think that’s a really healthy thing to learn, to confront and overcome. You’ve got to do stuff you’re scared of.”

Christiansen also urges students to stay true to themselves, a mantra he believes in so deeply that he has a version of it tattooed on his body in Latin.

“I just want to encourage everybody to be as much of themselves as possible, and to be enthusiastic about that and to be confident about that,” Christiansen said. “I think as humans we all in one form or another are just struggling with insecurity, anxiety, stress, learning to love ourselves more and being okay in our own skin. The more the more people can do that in healthy ways, the better.”

If you need immediate assistance, the Santa Clara County Suicide and Crisis Hotline is available at 1-855-278-4204 at any time. These numbers are also available on the back of student ID cards. If you feel you or someone you know needs immediate support, please call 911.