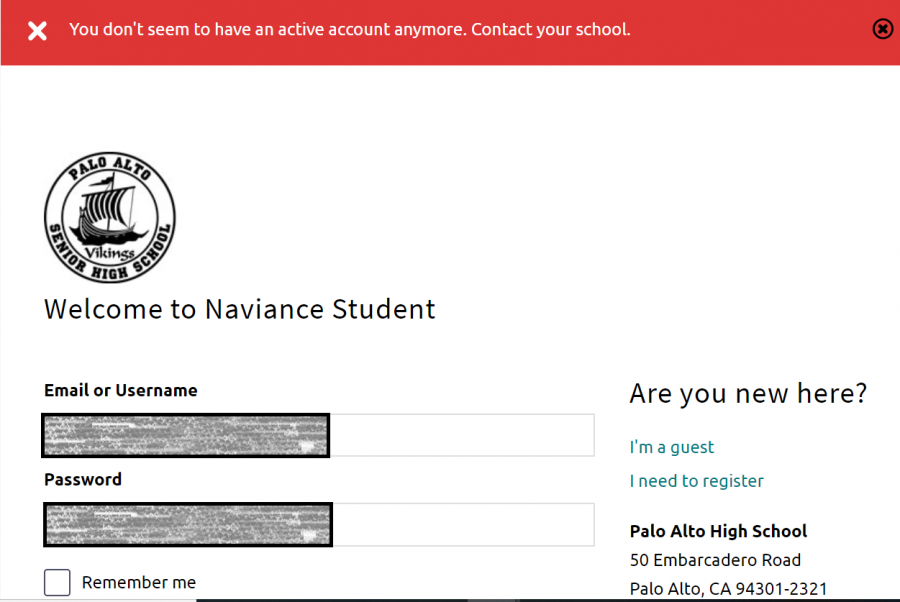 Students attempting to login to Naviance after Friday of last week were greeted with the above banner. Assistant Principal Katya Villalobos said that the school district's IT department is working on a solution.

For senior students, the college application process has hit an unexpected bump in the road, as the Palo Alto Unified School District IT department is currently working out issues with the college and career website Naviance after it unexpectedly went down last week.

Naviance allows students to search for colleges, organize letters of recommendation from teachers and create resumes.

According to Paly Assistant Principal Katya Villalobos, all student accounts on Naviance became inactive on Friday.

“As far as I can tell, it went down Friday late afternoon, probably after school hours,” Villalobos said.

According to Villalobos, both the Palo Alto Unified School District IT department and Naviance are working to bring Naviance back online.

“I spoke to Derek Moore, who’s our director of technology,” Villalobos said. “All he could tell me was that Naviance does have our help tickets from the district and they have upgraded it to … something very important to solve as quickly as they can.”

According to senior Rohan Maheshwaran, the abrupt shut-down has been a major inconvenience for him as he works on student profiles and college research with Naviance’s personalized tools.

“For seniors, we have a lot of surveys we might need to fill out, such as information for TAs,” Maheshwaran said. “It’s also the time of the school year where seniors are very busy preparing for their college apps, and Naviance is a central tool for that.”

Senior Kendrick Liem shared similar sentiments about the inconvenience caused by Naviance being down.

“Naviance helps me input in my school statistics and has more personalized data because there is lots of information about past Paly graduates,” Liem said. “While Naviance does shut down for maintenance, I think that it should be fine if it’s a short period of time.”