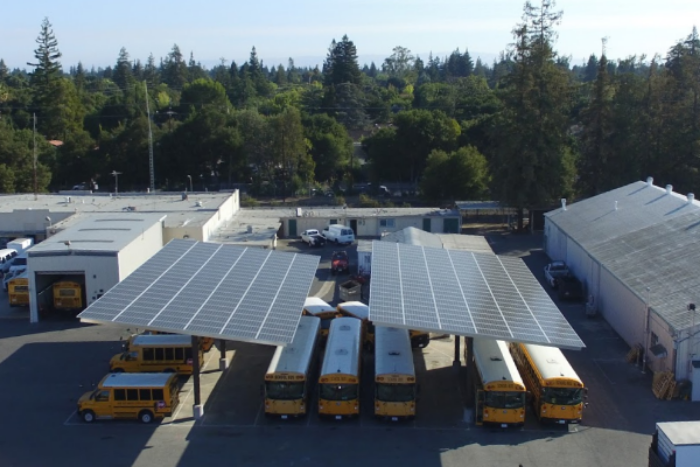 New solar panels gleam in Palo Alto High School's parking lot. The panels will begin generating power later this year and will save PAUSD a total of $600,000 over the course of their 25-year commercial life. 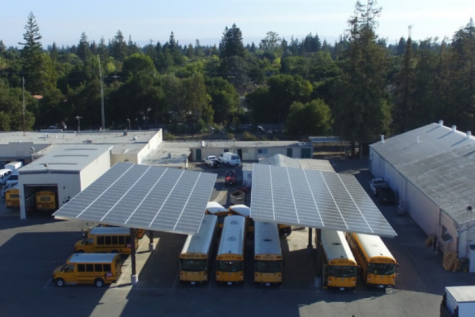 New solar panels gleam in Palo Alto High School’s parking lot. The panels will begin generating power later this year and will save PAUSD a total of $600,000 over the course of their 25-year commercial life.

The panels’ completion marks the end of a period of controversity in the community that began in 2016 with the Palo Alto Unified School district’s hiring of ARC Alternatives to survey PAUSD school campuses and draw up plans for construction.

However, the plan drew criticism from several community organizations, including the Friends and Alumni of Palo Alto High School, who feared that the panels would block the view of the building from El Camino.

In response to the community outcry, the board adopted a different plan in May 2018 that placed the solar panels in the Churchill parking lot and the corporation yard.

Paly librarian Rachel Kellerman said she was glad the board opted to address the community concerns.

“It’s really important whenever the school district decides to do something that there’s robust community engagement,” Kellerman said. “I think everybody had the right intentions on what to do, because solar is great, and, let’s face it, the planet really needs alternative energy. It’s just that the process needed to be more robust.”

ARC Alternatives president Russell Driver said that although the district-wide plan called for elevated carport panels at five schools and rooftop-mounted panels at two, the panels at Paly, which are exclusively carport panels, have finished construction.

“We have two sets of projects going; one is elevated carports, and construction on all of those projects started this summer and is essentially wrapped up with the exception of some electrical work,” said ARC Alternatives president Russell Driver on Tuesday at a school board meeting. “The panels are all mounted, and the work is largely complete.”

According to Driver, the solar panels at Paly have a system capacity of 216 kilowatts of power, and will begin generating power once Palo Alto Utilities and the Pacific Gas and Electric Company give final approval of the project.

“They still need to be commissioned and then interconnected,” district sustainability program manager Rebecca Navarro said. “They will become fully operational sometime between October and December 2018.”

According to a slideshow prepared by ARC Alternatives, the panels will save the district a net total of $600,000 over their expected 25-year commercial life, and will also generate enough energy to offset the carbon emitted from 42 average-sized homes drawing power for one year.

Navarro said that the money and energy the panels will save is not the only benefit they bring.

“We are working with City of Palo Alto Utilities to develop and offer to all PAUSD students a curriculum related to solar power that can be scoped to supplement any classroom K-12,” Navarro said. “We’re really excited that we have this authentic resource to offer for classroom learning.”

Navarro also said that the panels will provide shade for students to study or watch sports games.

Community member Walt Hays said that constructing the solar panels was an important move by the district in fighting the effects of climate change.

“We all have to do what we can do deal with this issue [climate change] but schools have a particularly important role because you’re educating the next generation,” Hays said. “What you [the board] are doing now is a very powerful and positive response to that challenge.”

According to Navarro, in November 2017, PAUSD entered into a contract with Renewable Energy Corporation Solar (REC Solar), an independent contractor, to begin building the panels. As part of the contract, the district itself did not have to pay for the installation of the panels. Rather it agreed to buy the power that the panels generate from REC Solar at a competitive rate.

Senior Galileo Defendi-Cho said that the solar panels were a first step towards a more environmentally safe school.

The solar panels’ benefits will be felt by generations of students to come, Navarro said.

“We’re really excited that we’ve created something tangible that shows our commitment to students, not just today, but as they grow up into the future,” Navarro said. “They can see our promise to make sure that we’re passing along an Earth that’s everything they deserve.”