Pro-life speaker to present on campus 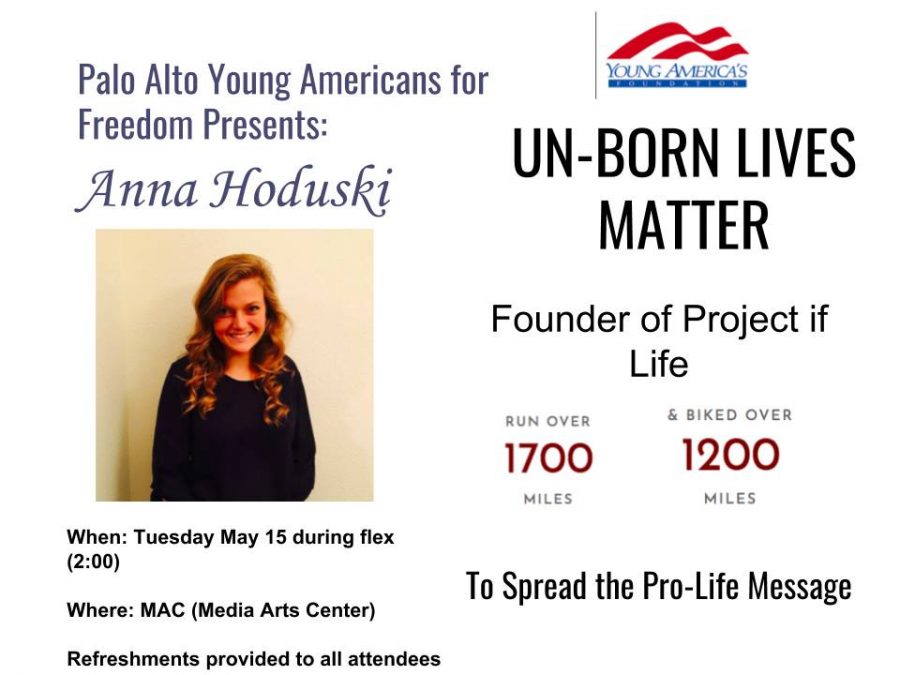 Update: The Paly administration has said that the event is not open to the public. The event is open to non-Paly students on an invite-only basis. The story has been changed to reflect this update.

The Palo Alto High School Young Americans for Freedom Chapter is hosting a speaker who will discuss pro-life issues during flex on Tuesday.

The presentation is set to take place in the Media Arts Center, according to the event’s Facebook page.

The speaker, Anna Hudoski, is the founder of Project If Life, and will speak about “rights of the unborn and why we need to choose life,” the event flyer said.

“Many students do not understand the significance of life in the womb,” junior Yasmeen Gavande, the event’s organizer, said. “Living in this liberal bubble, many students consider an abortion to be comparable to a dental procedure. Bringing Anna [Hoduski] to speak will hopefully give students a chance to understand pro-life.”

Hoduski founded Project If Life in 2016, biking and running 3,000 miles across the U.S. to speak at different venues to “educate and activate others into the equality movement for the preborn,” according to her website.

While Hoduski first became passionate about the pro-life movement in elementary school, she continues to hold these beliefs as a professional speaker. Gavande, who is the founding chairwoman of Paly’s Young Americans for Freedom chapter, originally heard Hodsuki speak at a YAF convention. She found her to be an engaging speaker and decided to organize a talk at Paly as well.

Gavande said that while she has often experienced pushback from others due to her conservative views, she has found her time with YAF rewarding.

“Challenges [include] encouraging other students to participate in projects, organizing activities, dealing with people calling you racist or misogynistic [and] hosting speakers by yourself,” Gavande said. “[A] big challenge is that a lot of conservatives are too scared of what people will think if they are in the club so they don’t participate.”

In bringing in different perspectives, Gavande hopes that this event will inspire others to stand up for what they believe in and clear up misconceptions about what conservatism is.

“Having different political views here is very intimidating for many students,” Gavande said. “Many students fear the repercussions of revealing their political views, so there are many closeted conservatives in Palo Alto.”

The event is open to Paly students. YAF asks that invited non-Paly students check in first with the front office.