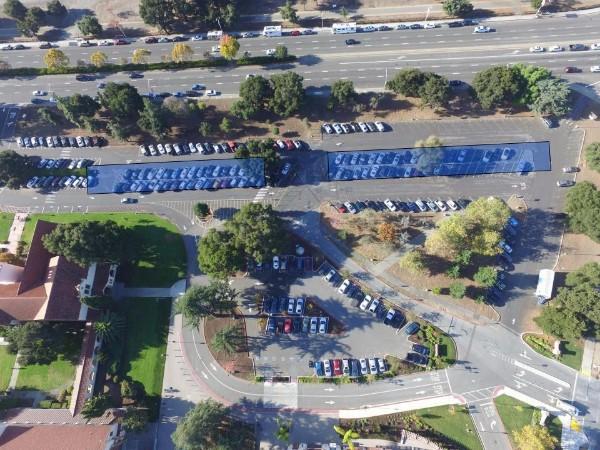 This aerial photo shows the proposed locations of the solar panels that REC Solar will build in Palo Alto High School’s El Camino parking lot. Members of the community have criticized the project for disrupting the campus’s aesthetic and uprooting trees in the parking lot. “Placing tall metal carports within the front boundaries of the Haymarket and Tower complex drastically changes the open inviting view of these iconic buildings that people have enjoyed for over 100 years,” Paly librarian Rachel Kellerman said. Photo: Jevan Yu

These organizations include the Friends and Alumni of Palo Alto High School and the Paly Facilities Steering Committee.

According to the district sustainability program manager Rebecca Navarro, an independent contractor called Renewable Energy Corporation Solar will begin building the panels in early June, with most of the heavy construction being completed before August.

Opponents of the plan say that the solar panels could block the view of Palo Alto High School’s historic Tower Building from El Camino.

“It’s important when in weighing costs and benefits that we also consider cost to our green environment and the architectural integrity of our historic buildings,” said Rachel Kellerman, a Paly librarian and member of the Palo Alto Historical Association. “There are many who believe we can attain great solar benefits at Paly without the permanent cost of losing new and future trees and the view of our historic buildings.”

According to Kellerman, the district should try to find other ways to integrate the panels without disrupting the campus aesthetic.

“Paly really needs solar, but not at the expense of historic buildings and our green landscape,” Kellerman said. “Paly should adopt solar on its rooftops and in places that are away from public view using a deliberate, transparent process … The space at the corner of Embarcadero and El Camino is basically Paly’s front yard. No other buildings on El Camino in our neighborhood have solar carports in front of their entrances.”

In 2016, the district hired a consulting company, ARC Alternatives, to survey school campuses as potential building sites. Navarro, who has worked closely with ARC Alternatives, says that it has taken community criticism into account in the planning process.

“We have listened to community concerns about the view of the Tower Building and have shared these concerns with our leadership as well as our design team,” Navarro said in an email. “After considering a number of ways to address this controversy, we have decided to move forward with a solar plan that offers the same generation capacity for Paly campus and preserves the view of the Tower building.”

Navarro did not specify what the plan was or how it would not interfere with the view of the Tower Building in her email.

Members of the community voiced their concerns during a PAUSD board meeting on May 8.

“The first concern I will address is the silent way this proposal is handled,” said Edith Miller, the president of Alumni and Friends of Palo Alto High School. “Neither the Paly facilities committee nor the alumni were aware of the already signed contract until this March. Many alumni have reminded me that when the district wishes to let people know what’s going on, such as middle school name changes … the word gets out very quickly. So the question is, why did this notice not come out more quickly to everyone?”

Speaker Kirsten Essenmacher, who is also a member of the Alumni and Friends of Palo Alto High School, said that the board has placed too much emphasis on sustainable energy.

“Sadly, the district sustainability committee and staff focused entirely on sustainable energy, which is a laudable goal, but in doing so also failed to take into account the need for sustainable development,” Essenmacher said. “In addition, the carports will loom large and ugly over the surrounding trees and will break up the arboretum, which will then cease to exist as a unified greenspace.”

In contrast, Junior Adam Love said PAUSD should follow the example set by other school districts that have also installed solar panels in their schools.

“I think that’s [the solar panels are] actually a really good idea … I’ve seen that other districts have incorporated solar panels into their parking lots, and I think that being a green city, as we are, living in Palo Alto, it’s about time that we get solar panels … I’m glad it’s happening,” Love said.

The district ordered the construction of the panels to save money on energy costs, according to Navarro.

“We will not generate enough power to offset our electricity consumption entirely, so CPA Utilities [Palo Alto Utilities] will credit us on our bill for what the panels have generated,” Navarro said. “We estimate that we will save about $12,000 annually on Paly’s electric costs.”

According to Navarro, REC Solar will oversee the construction of the panels at little to no cost to the district, which will be able to buy the power that the panels supply.

Once the solar panels are installed, they will be on campus for at least 20 years, Navarro said.