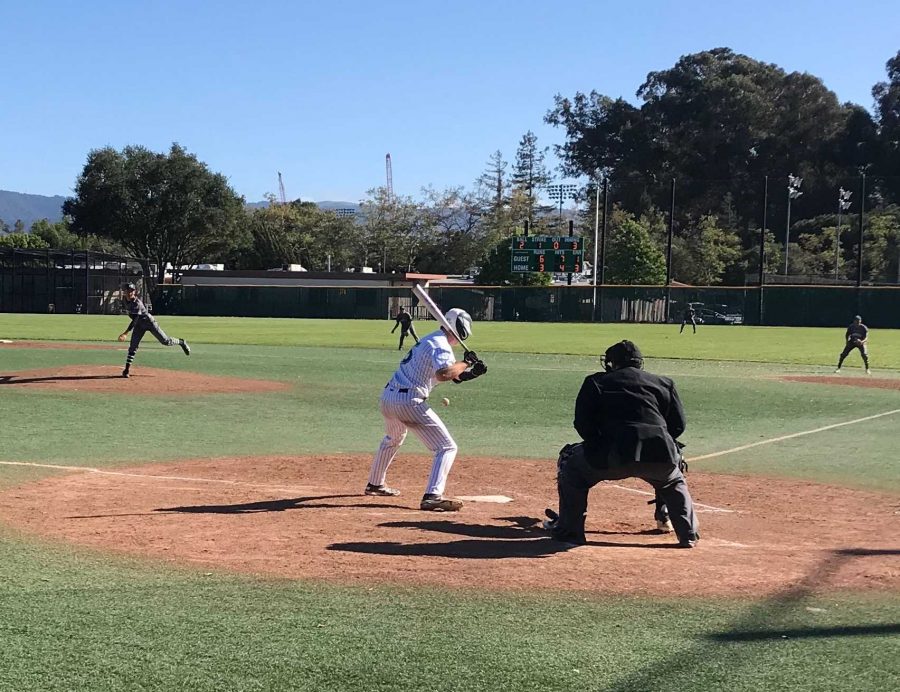 With a late rally comeback win yesterday in the Santa Clara Valley Athletic League playoffs, the Palo Alto High School baseball team (21-6, 13-1) is advancing to the SCVAL finals to compete for a back-to-back outright title against its toughest De Anza League opponent, the Los Gatos Wildcats (21-7, 11-3).

The Vikings put up three runs versus Homestead (18-11, 7-7) in the first inning, only to go scoreless for the next two innings. Unprecedented errors turned a 3-1 Viking lead into a 6-3 Mustang lead by the top of the third inning.

“Obviously today we struggled on defense as a team,” senior infielder Max Jung-Goldberg said. “We usually don’t make five errors in a game but we battled on offense and found a way to win.”

Paly responded with four runs in the bottom of the fourth inning, including a clutch home run from senior infielder Niko Lillios.

“Our team has a lot of chemistry and I think that is what helps us when we have to find a way to pick ourselves up,” Jung-Goldberg said. “Especially in a game like today where we had errors on defense, we had to find a way to put the adversity behind us and continue to compete. Our team has constantly shown that we refuse to quit, even when we are down, and I think that attitude is what allowed us to make a comeback today. “

On Friday, the Vikings will take on the Los Gatos Wildcats, who advanced to the championship yesterday on an extra inning walk-off win versus the Wilcox Chargers (18-10, 8-6).

“Going into Friday against [Los] Gatos, we want to stay in the present moment and play with confidence,” Jung-Goldberg said. “The goal is to play clean on both sides of the ball. Make the routine plays on defense and take good at bats up and down the lineup on offense. If we do that then I think we put ourselves in a great position to win.”

The Wildcats handed Paly its only league loss of the season. The Vikings need to win this game to secure a spot in the Central Coast Section Open Division, which will only be taking eight teams this year, as opposed to 16.

“I think our team should make Open [Division] CCS,” Jung-Goldberg said. “I think if we can take care of business on Friday that gives us a good chance to make Open and get an opportunity to battle with the best of the best.”

Paly face Los Gatos at 4 p.m. on Friday at home.