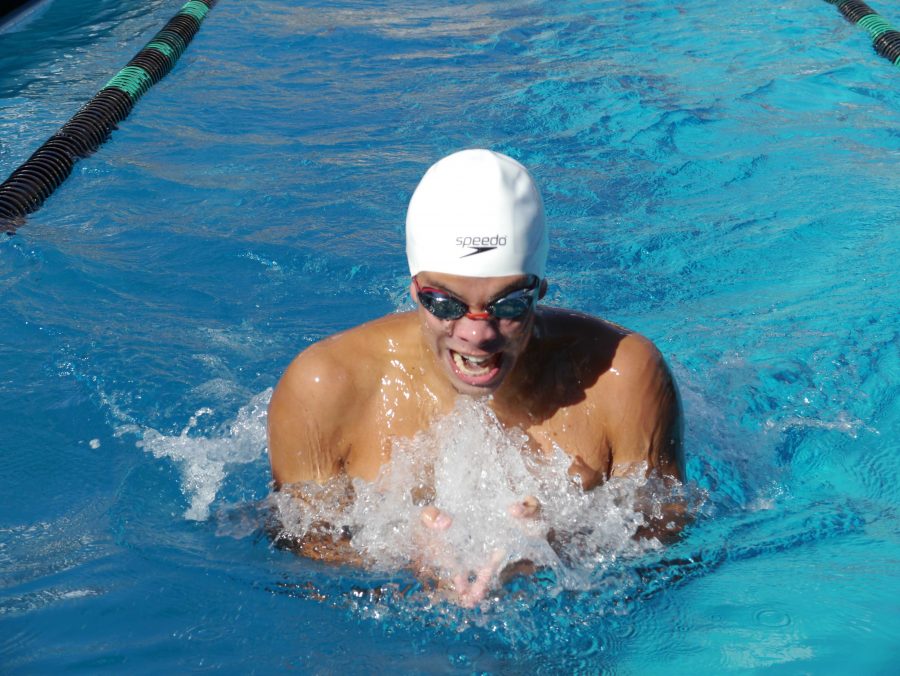 Although the boys’ and girls’ teams both failed to beat Gunn in the league finals, placing second, they finished first in the league standings because of their stellar record for dual meets — competitions against one other school.

While the boys’ team had not won the league title in six years, the league victory was the fourth in a row for the girls’ team, who has not lost a dual meet in four years. With this win in the books, both teams will enter into next season as defending league champions.

“The team was ecstatic after the win on Friday,” junior swimmer Justin Cheok said. “We all wanted to win, so we came together and raced as hard as we possibly could have. If we were missing any one person, the meet would’ve been a lot harder.”

Cheok attributed the win to the team’s strenuous practices throughout the season led by Head Coach Danny Dye.

“Every practice, people pushed each other to keep on going through the harsh and wearisome practices that Danny puts us through, and I’m sure it paid off,” Cheok said.

Dye shared this sentiment and was pleased with the team’s overall performance.

“I was very happy,” Dye said. “The teams are both young, and they grew throughout the season.  They learned how to race and, with the training, improved beyond expectation.”

Although not all members of the team qualified to compete in the league finals, Paly swimmers and spectators came to support the team. According to sophomore swimmer Kate Milne, the girls’ team had focused this season not only on dropping time in their individual events, but also “really being vocal and cheering for each other.”

“Even the people who didn’t swim came to cheer, which really helped me and others get hyped up for our races,” Cheok said.

Dye also acknowledged the importance of the team’s cooperative dynamic, adding that many upperclassmen Vikings served as role models for the rest of the team.

“For both teams I thought it was a team effort that got them to succeed, everyone doing what they needed,” Dye said. “The three senior girls were great leaders for the girls’ team, Zoe Lusk, Claire Lin and Peyton Wang. For the boys, Jack Hogan, Justin Cheok and Aaron Kuo really set a good example.”

“I am happy with my performance overall at leagues,” Lusk said. “Our season was pretty good.”

Lusk will graduate this year and has committed to Duke University for swimming.

“I will definitely miss the team environment at Paly and all of the friends I have made on the team,” Lusk said.

The league final was the last meet of the season for the majority of the team. However, 10 swimmers from the girls’ team and eight swimmers from the boys’ team, who qualified through their fast times, will race at the Central Coast Section Championships on May 11 at Santa Clara University. Lusk will compete at least once more for Paly at CCS, where she will swim the 200 Individual Medley and 100 Backstroke events. Cheok will also compete at CCS in the 100 Breaststroke and 200 Individual Medley. The top three finishers in each event and those who swim fast enough times at CCS will go on to compete at the State Championships.

“I am looking to make finals in the 100 yard [sic] Breaststroke and go under 2 minutes in the 200 IM,” Cheok said. “I will also be in the 200 yard [sic] Medley and Freestyle relays, and I hope that we can make it to States in these two events.”

With the regular season in the wraps, Dye acknowledged the potential challenges the girls’ team may face and expressed optimism for the boys’ team going into next season.

“For the girls, it will be a challenge simply from a numbers standpoint,” Dye said. “They will still be a good team, and I think some of the younger swimmers will step up. The boys are poised to have a nice run with a young team.”