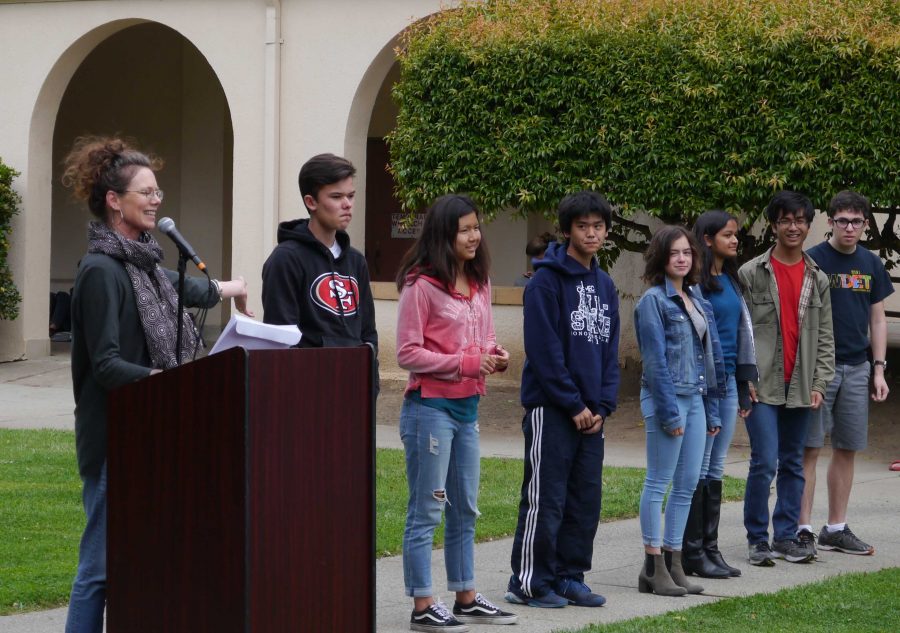 Palo Alto High School departments honored 69 students with the Rachel Austin Award in front of parents, teachers and administrators on the Paly Quad during lunch on Thursday, recognizing select students who continue to strive for excellence.

The awardees each received a certificate and a check for $25.

According to choir teacher Michael Najar, who spoke at the ceremony, the annual award is given to exceptional students from each department in honor of Rachel Austin, a former Paly Home Economics teacher.

“The Rachel Austin Award is the most enduring award that Palo Alto High School has to offer,” Najar said in his speech addressing the attendees. “For almost 40 years this award has been bestowed upon great students like yourselves. Faculty is always excited to award students in this category because … they are engaged in the curriculum and will often benefit the most from the great instruction that Paly has to offer.”

Each Paly department has a role in selecting the award recipients. According to Math Instructional Leader Arne Lim, the decision process consists of meetings and discussions between teachers.

“Each department has a meeting, and at that meeting we know how many awardees we get and we do it by grade level,” Lim said. “We know how many slots we have to fill, so if we have too many students for those slots, we talk it over about who would be a good candidate for this year.”

Since each student can only receive the award once during their career at Paly, the decision process can become difficult.

“All the names from the other department come together, and if there is a duplicate, then we kind of have to arm wrestle over which department gets to bestow [the award],” Lim said. “We also keep track of these names for four years because the stipulation for this award is that a student can receive this award once and only once while he or she is here at Paly.”

Freshman Anna Feenstra was recognized by the Math department at the ceremony.

“I was very surprised,” Feenstra said. “I felt honored … It was cool to get the award.”

Feenstra’s parents were both in attendance to celebrate her recognition. Prior to the ceremony, students and their parents were not notified of which department had selected them for the award.

“We didn’t know what kind of award it was so [we were] surprised to see it for math,” Feenstra’s father, Peter Feenstra, said. “I’m very pleased with that.”

“When they described the premise of the award, I was pretty sure I would get it for choir,” Sun said.

Sun enjoyed the ceremony and the opportunity to share the experience with his friends.

“I felt really proud of what everyone did, and knowing that some of my friends got it as well made me feel very happy for them,” Sun said.

In his speech, Najar recounted the story of the award’s sponsor and namesake, Rachel Austin.

“Rachel was forced into retirement by the now-removed rules of education,” Najar said. “She was so dedicated to her job that she was at a loss of what to do when she was forced to retire.”

According to Najar, Austin returned to Paly and requested to work as a volunteer in the Home Economics department. When she died, Austin left a quarter of her estate to Palo Alto High School, which amounted to the modern equivalent of $200,000.

Since Austin’s passing, the award created in her honor has recognized students with Austin’s dedication and commitment to learning.

A slideshow of the event and a list of awardees are included below.