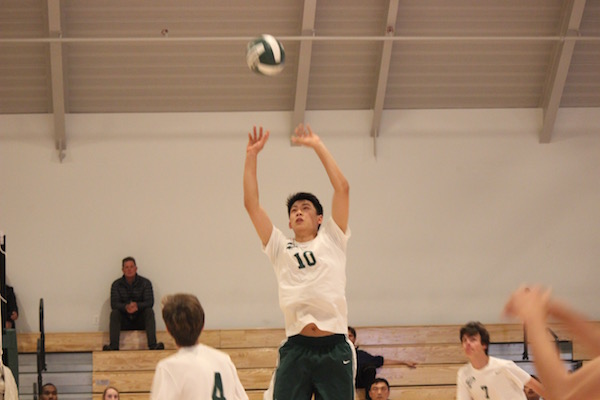 According to Gunn senior outside hitter Daniel Kachenko, when the Titans and Vikings faced off on April 13, home-court advantage played a role in Gunn’s 3-0 victory, despite Paly’s strong effort.

“As a team I think we effectively controlled the pace of the game, using both the adrenaline one receives playing his rival school and the immense support coming from our classmates,” Kachenko said. “Our coach has been pushing us the whole season to start off strong and finish quick, and I think everything snapped into place when it mattered.”

The Titans, led by senior outside hitter Rhys Tracy, who is a University of California, Santa Barbara men’s volleyball commit, are one of the best teams in the El Camino league and quickly defeated Paly in three sets when the two teams faced off earlier in the season. Gunn is also coming off of a five-game winning streak.

Junior libero Miles Schulman said the team is more prepared for Friday’s matchup now that it knows which Gunn players it has to contain.

“They had home court advantage the first game so we’re excited for the added benefit of playing on our home court and hope we’ll do better,” Schulman said. “In practice we’ve been working a lot on digging because they have a really good hitter. So we’re hoping our passes will be better than last time.”

Junior setter Raymon Chen said he will be approaching this game with a different personal strategy than most other matches, as Gunn is one of the best teams in the El Camino league, with an 8-2 league record.

“Specifically, I’m going to try and run the offense a bit more,” Chen said. “In the first game, we were trying out a different rotation that we never practiced, and it didn’t end well. I’m just going to try and serve aggressively. They weren’t the best passing team so we can try and abuse that.”

According to Kachenko, the Titans are entering Friday’s matchup with a focused mindset, despite being favored to win.

“The team is taking Friday’s game very seriously,” Kachenko said. “We’ve just recently started having home games, so I think all that preparation traveling the Bay and having to mentally block out the other team’s sidelines is going to come in handy, especially versus a school with as much spirit as Paly.”