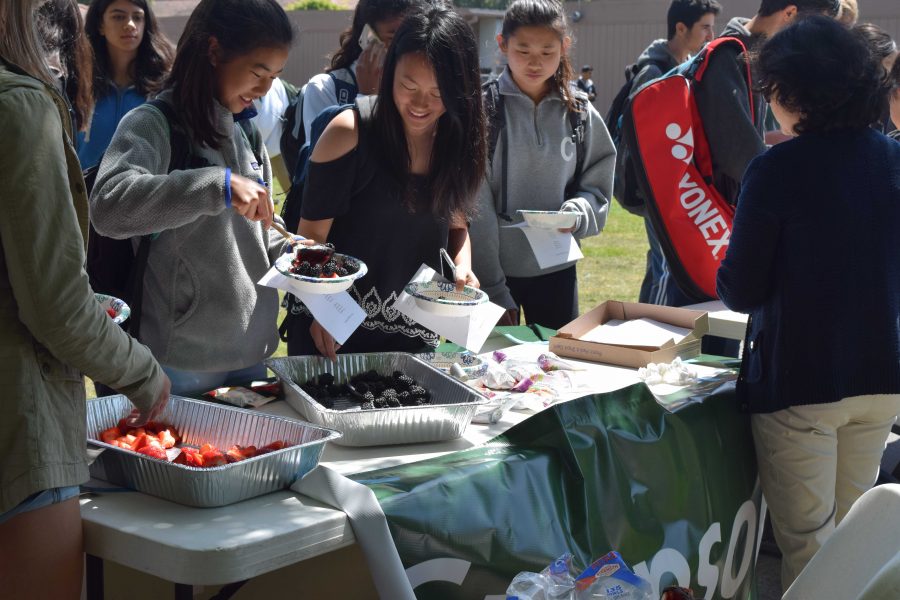 Sophomore Samantha Kao, left, grabs a healthy snack. Parent volunteers served locally grown fruit and granola during Day 1 of Change in Our Schools week, which focuses on issues that need change at Palo Alto High School. "“Change in Our Schools Week is something that the School Wellness and Climate Committee has been working on that is basically a whole week long full of events during lunch time that focus on changes in our school, like bringing more awareness to certain events or certain things that we would like to focus on more as a school," junior Noor Navaid said.

Change in Our Schools Week, a week-long series of performances and events on the Quad, looks to bring change to mind at Palo Alto High School by educating students on stigmatized issues such as mental health.

According to CIOS organizer and junior Noor Navaid, Day 1’s theme, “Paly is,” focused on what Paly is as a school.

“We have food out here,” Navaid said. “We have events from Paly clubs, such as Bring Change 2 Mind and YCS. You also have juggling out here, doing little activities. It just really shows what Paly has to offer and what Paly is. … We’re also going to be going around and asking students to explain to us what they think about Paly, what they think Paly represents.”

“They [the Wellness Grams] are based off of the concept of Valgrams, we wanted to have a way for people to send out stress less messages,” Bring Change 2 Mind club president and junior Lia Salvatierra said. “I feel like if you receive something at class that’s sent from another person who’s caring about you, I think that it definitely is a very positive note in your day, especially if you are having a lot of pressure on yourself throughout the day.”

According to Navaid, the School Wellness and Climate Committee, which organized CIOS week, is looking to expand the event’s reach.

“We have made little changes here and there,” Navaid said. “There have been some little changes to my knowledge, with performances and getting more representation all around, last year we only had several groups come for identity day but we’re definitely increasing that this year.”

Many of the topics that CIOS week focuses on, such as mental health, are important to discuss because they are difficult to talk about, Salvatierra said.

“I think that a lot of times, we have a lot of things to say about mental health, but we’re never given a platform to talk about them, whereas there are a lot of other social issues that are talked about a lot, but mental health is one that’s still super tabooed,” Salvatierra said.

According to Navaid, Day 2’s theme will be centered around self-identity.

“We will have groups such as the SAMoSA [South Asian Movies, Sports, and Arts] club, which is our South Asian student club, BSU [black scholars united], and the Korean club, and just any of our clubs that represent each group in our school, essentially,” Navaid said. “Through that we focus on bringing changes in our school, but also spreading awareness and bringing our school together as a whole collective student body.”