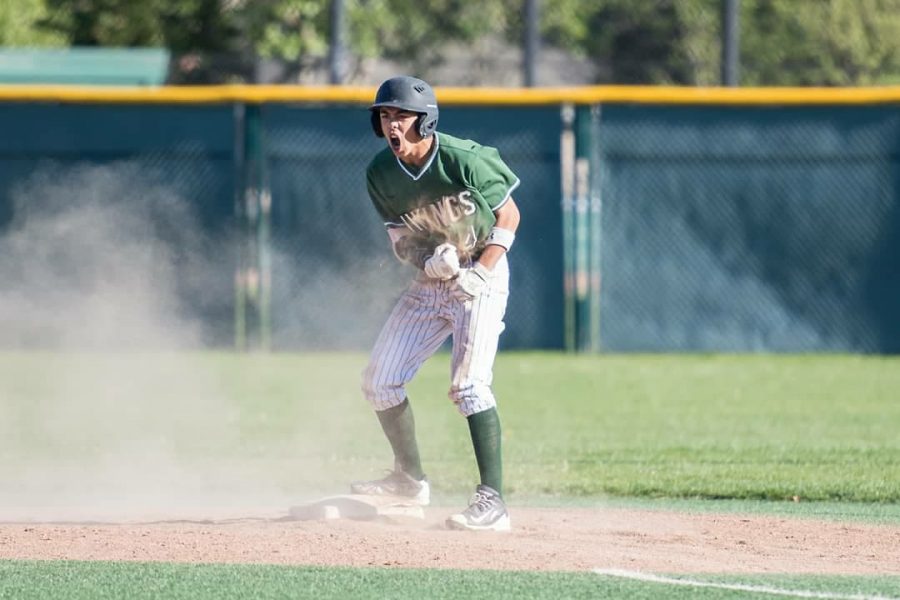 Every year, as a wave of seniors depart, more often than not, a new, energetic player joins the varsity team from the junior varsity team and makes an impact at the highest level. This season, the Palo Alto High School baseball team has been revitalized by freshman third baseman Aidan Berger.

Berger has already solidified himself in the lineup, with 13 runs batted in and 14 runs scored in the leadoff spot for the Vikings. (Stats from MaxPreps.com, accurate as of April 28)

Berger credits his drive for his development this season.

“Every day my goal is to get better whether its getting stronger and faster or working on hitting and fielding,” Berger said.

Berger is the first freshman to play on the varsity team since now-senior shortstop Max Jung-Goldberg accomplished the feat in 2015.

“It’s a great opportunity, playing with the older guys and competition,” Berger explained. “My teammates have really taken me under their wing and helped me throughout the season. It definitely motivates me to work harder especially following the footsteps of Max [Jung-Goldberg].”

Berger’s strengths lie in his strong play at the hot corner, throwing into five double plays and 44 assists thus far in the season. His strong play was noted this season as he was named a Player to Watch in the Boras Classic of California, a state tournament that connects elite athletes, collegiate coaches and MLB scouts from all over the country.

Jung-Goldberg is already impressed with Berger’s development as the season has gone on.

“His defense is coming along but he is also a natural second baseman so he is learning how to play third on the fly,” Jung-Goldberg said. “I would honestly say that his offense has been the part that has been most significant on our team.”

Despite lacking experience on the varsity team Jung-Goldberg admires Berger’s composure. “No matter if he’s 0-4 or 4-4, he has a quiet confidence about him. He looks locked in every at bat and is a competitor, no matter who he’s facing,” Jung-Goldberg said. “Berger is a really advanced hitter for his age and he will be the face of this program for the next four years.”

Nicknamed “Cheese-Berger” and “The Dominican Flare,” the freshman has quickly earned the reputation for being a student of the game.

“Being around the older guys I try to take in everything they have to say and incorporate it into my game,” Berger said.

“We had a great group of guys who looked to become better,” Ali said. “Aidan [Berger] was quiet at the beginning, but he would always give 100 percent.”

Correction: An earlier version of this article misstated the credits for the photographs, which have since been removed. They were taken by Karen Ambrose Hickey.