‘A Quiet Place’: A silent but powerful thriller 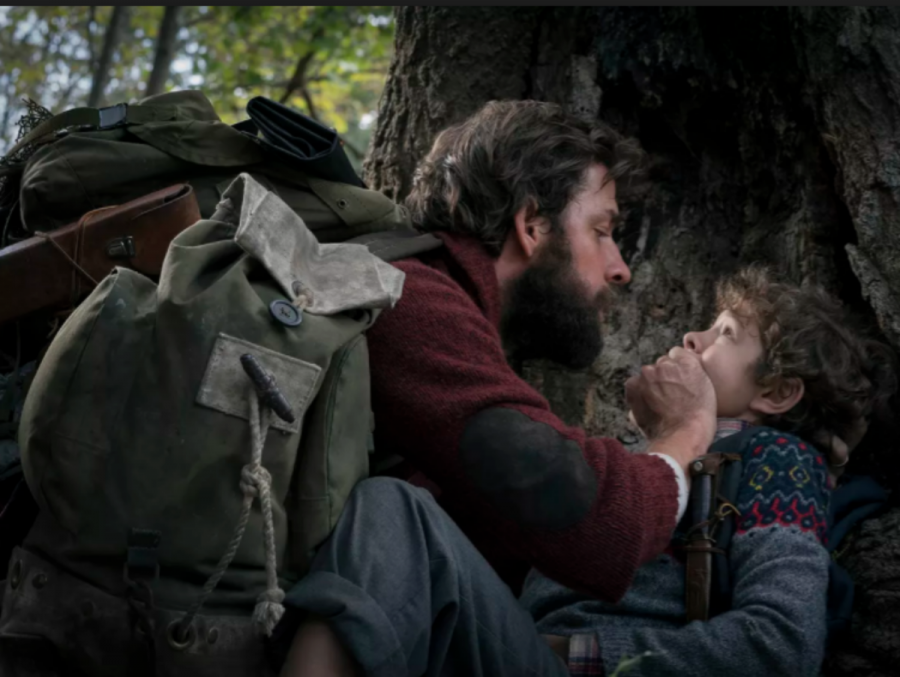 Silence means survival in “A Quiet Place,” released in the United States on April 6 by Paramount Pictures. The few humans that are still alive must find ways to live their lives in absolute silence with the fear of being killed by a creature if they make any sound. The blind creatures, who purely hunt by sound, seem to have no weaknesses and a family of four learn the struggles of staying silent with a newborn baby.

Director John Krasinski shows his fans that he is more than capable of directing a large movie in his new successful film, “A Quiet Place.” Krasinski initially rose to prominence for his role as Jim Halpert in the comedic TV show “The Office,” and this movie demonstrates his prowess as a director and an actor in a more serious film.

The post-apocalyptic thriller is set in a world that has been overrun by mysterious monsters who have hunted and killed nearly all the people. These monsters are very sensitive to sound, with the slightest noise drawing them in. The Abbots —a small family made up of the husband Lee (Krasinski), a pregnant wife, Evelyn (Emily Blunt), a son Marcus (Noah Jupe) and a daughter Regan (Millicent Simmonds)— must find a way to stay silent in every aspect of their lives, fearful of sounds.

Often in horror films, the audience finds itself angry with the characters on screen, confused by the unwise decisions they make. However, in “A Quiet Place,” the characters are very smart, having constructed a complex lighting system around their farm that helps warn each other if something is wrong.

Fortunately for the family, they also have the benefit of their daughter Regan being deaf, which causes them to all know, speak and understand sign language. This becomes extremely helpful in this setting as the family’s communication methods are a lot safer and easier. However, her inability to hear is also a disability as she does not know when she is making noise.

The family has adapted to this new world and has made many subtle changes in their lives that prevent them from making any noise. For instance, they are overcautious and do things such as placing sand over trails and playing with monopoly pieces made out of felt and eat on leaves instead of plates in order to keep quiet. These little things showcase Krasinski’s attention to detail and made the movie seem more realistic.

Although they are able to keep up this way of life for a long period of time, staying silent for years is no easy task, and when the pregnant mother goes into labor, problems arise that endanger the whole family.

Krasinski, who is known for his facetious jokes and funny faces from “The Office,” is surprisingly effective at maximizing the suspense of the movie. He uses dramatic irony by revealing threats and dangers to the audience before he reveals them to the characters. This dramatic irony foreshadows harm among the family and raises the suspense level of the film. Additionally, he uses character development specifically with the kids by revealing how they mature over the course of the apocalypse by becoming more responsible and protective of their family.

Given that the film is based on a concept of silence taken to the extreme, there is not much dialogue. Krasinski forces us to pay attention to the facial expressions and actions of the characters.

The concept of silence also limits the soundtrack and the music; however, it is obvious that the music was well thought out. In contrast to most other horror films, the music that the team decides to use is not creepy, but rather relaxing and slow.

Because the movie is silent for the majority of the film, it remains tense from the opening scene to the last, with a healthy combination of well-developed jump scares and touching moments that allows the audience to enjoy the horror side of the film while also being able to stay connected and invested in the characters.

Because the movie begins 89 days after the apocalypse has started, the Abbots are one of the few families that are still alive. Therefore, there are not many characters in the film and the cast is very small and compact. However, the performances from the characters are solid across the board as the cast is able to make the audience care and worry for the characters with very little dialogue.

The performances from Blunt, Simmonds and Jupe are enticing as they are effective at portraying the family as close and tightly bonded. Blunt has great chemistry with Krasinski as they are married in real life. Simmonds lost her hearing when she was just twelve months old, and her deafness outside the film makes her portrayal of Regan more genuine. Jupe, having experience in films such as “Wonder,” also delivers a great performance, displaying many touching and real moments in the film.

“A Quiet Place” is a suspenseful drama that is built off of a unique concept taken to the extreme. This concept is what makes the film shine as it surprisingly reveals the difficulties of doing something as simple as staying quiet. Krasinski is able to use this tension and silence to make a masterful, compelling and suspenseful thriller with many well implemented jump scares.

Rated PG-13 for terror and some bloody images