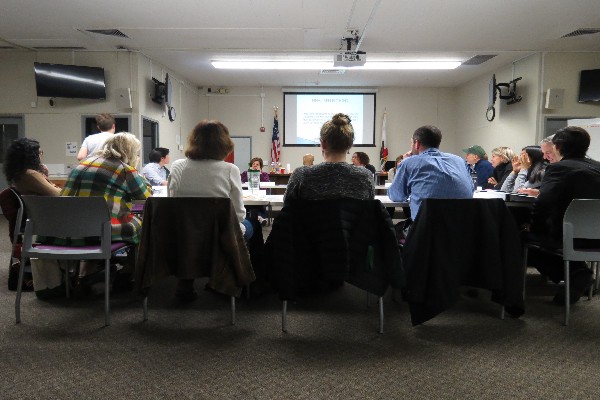 A packet depicting the Innovative Schedule Committee's schedule 80M, which features a later start time on both even and odd days as well as an elimination of C days. The Committee's next step is to get the PAUSD school board's approval. "Hopefully they will, we spent a long time on this, so hopefully they trust us", committee member and junior David Foster said.

The statements are attached below.

Site Council statement: We, as parents and student members, of the site council at Palo Alto High School want to respond to a series of events that have occurred over the past few years. Some examples include the weighted GPA decision, Title IX issues and the bell schedule. The site council believes it is better to be an “upstander” and not a bystander. We felt it was important to respond since we do not want the voices of the few to have drowned out the silent majority. We encourage all to speak up and not just be bystanders. In all of these incidents we have noticed the following: · we are mired in politics under the guise of “what is best for students” · decisions made are and were frequently risk averse, stifling innovation and creativity · lack of collaboration between all stakeholders and instead creating a divisive community pitting one against the other (board, teachers, district, students, parents) · not providing a stable nurturing environment for students, teachers and administrators · The most vocal group does not represent the point of view of all stakeholders (teachers, students and all parents) and we feel does not always advocate for the best interests of the whole child. · Lack of respect given to the former Superintendent, Max McGee, former Paly vice-principal, Kathie Laurence and Principal Kim Diorio. As a student has said – it feels like we are “bullying” these administrators. The behavior that has been displayed could result in us attracting individuals in a leadership or teaching role who are afraid to make decisions and will limit their transparency in order to survive. Fear of upsetting parents will trump what they believe is right for students. In addition, now we will be spending money on head hunters instead of students. Instead of recognizing the positive accomplishments of the bell schedule and WASC reports, students are confused by the negativity and misinformation they hear in the press and from their peers. They see that it is acceptable to dis-respect school and district leaders when it does not align with their approach. The regard the students have for their superintendent and principal is now impacted by an outside cloud of negativity. As a point of note – from the public reports we received (from the bell schedule committee) in the site council meetings, the process followed for the bell schedule was inclusive. This would be a good example of how to collaborate among all stakeholders and collectively recommend a solution that benefit the “whole student”. We would like to thank Kim Diorio for dedicating 11 years to tirelessly working for the betterment of the school and for keeping the best interests of the children at heart. Regards, Parent & Student Members of the PAHS Site Council PTSA statement: Message written by Sumita Vasudeva on behalf of the Paly PTSA Executive Board: When the Principal Resigns… Kim Diorio has been an educational and administrative leader of our school. She has supported her staff while attending to the needs of our families and encouraged parents to engage in the school. We are sorry to see her go and wish her the best in her next pursuit. So, while our community embarks on a search for a new principal, let us support each other and our students through this sense of loss and perceived turmoil. There is concern that the recent leadership departure will cause a setback to initiatives, result in increased staff attrition and lower the morale on campus. In order to address these fears, we suggest that we: 1. Acknowledge/ listen to our students and reassure them that the school is in the hands of trusted and capable next-level leaders. 2. Support our school staff and administration by reaching out to them with kind and encouraging words/actions of support. 3. Remind ourselves that this is a resilient community and that we will rise above the politics of these past weeks to refocus our attention on the strong bonds and connections within this iconic school. Please direct your students to the Paly Wellness Center for additional support, if needed.