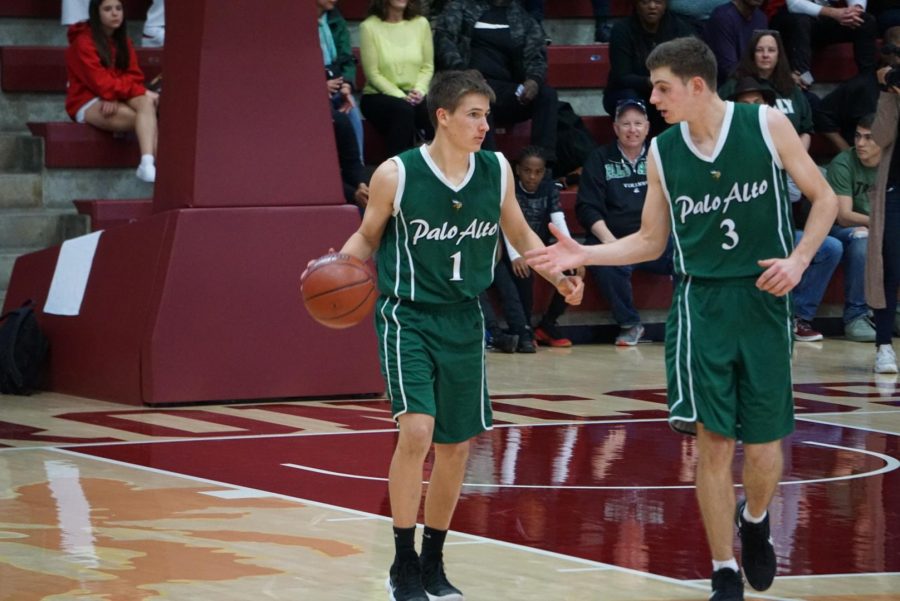 Saturday’s regional final game at Santa Clara University’s Leavey Center felt all too familiar. Just like last year’s regional final against James Logan, Paly led early and often, controlled the tempo but was unable to create a decisive lead. The Vikings let their opponent remain within striking distance in the second half, fell behind in the fourth quarter, and ultimately were unable to complete the comeback in the final minutes. This year, the Palo Alto boys’ basketball team (26-4, 12-0) succumbed to the Las Lomas Knights (31-3, 9-1), 44-41.

In similar fashion to its win against No. 1 Heritage, Paly slowed the pace of the game in order to control Las Lomas’s high octane offense. The Knights, who scored 84 points in their regional semifinal win, only managed 44 points in the game, including 17 in the first half.

Both teams were cold from the start, missing jumpers, three-pointers and jump-hooks from the low post. The Vikings had multiple opportunities to pull away in the first half that they were unable to cash in on. Up five points, senior forward Max Dorward made a driving layup that was called as a charge and Las Lomas took the ball down the court and drilled a three-pointer. Paly was now only up two points rather eight.

Trailing by two at the break, 19-17, Las Lomas pushed the tempo in the third quarter, taking a five-point lead into the final quarter, 30-25.

Las Lomas senior Nathan Robinson, who led all scorers with 18 points, including 11 in the fourth quarter, opened up the quarter with a triple, extending the Knight lead to eight. Another Robinson three-pointer put Las Lomas up 11 with just under five minutes remaining.

Paly began pressing high and trapping full court, creating a number of scrambled Las Lomas possessions and turnovers, capped off by senior Jared Wulbrun nailing a deep triple, Paly’s only in the contest, and cutting the Las Lomas lead to four, 40-36.

“Even when the three isn’t falling we try and stick to our offense,” Dorward, who added 10 points for Paly, said. “In the past couple of games we hadn’t shot super well from the three either and other guys stepped up and made some tough shots around the basket. We sometimes even go out of our way to try and get Jared [Wulbrun] or [senior guard] Spencer Rojahn an open look to get them going again.”

The Vikings missed the front end of a one and one free throw down four with just under a minute remaining and Las Lomas hit enough of its free throws to keep Paly at bay and hang on for a 44-41 victory.

The loss caps off another incredible season for Palo Alto boys’ basketball. Paly won 25+ games for the second consecutive season, while also capturing another De Anza League title, going undefeated in league play. The boys hung tight with nationally ranked Salesian High School and became the first public school to ever win a CCS Open Division playoff game. The Vikings went on the road and defeated the No.1 seed in the state tournament, again. And Paly advanced to the regional final of the state tournament and put up an admirable effort that made all Paly faithful proud to call themselves Vikings.

According to senior forward William Schlemmer, the boys have a lot to be proud of.

“Last year making it to the NorCal finals seemed like a dream, this year it was an expectation and I’m just sad that the game we played didn’t reflect our normal team style and ability,” Schlemmer said. “That being said I think we had one of the most dominant two-year performances that any Paly sports team has had and I’m honored to have been a part of it.”

“I think our season is definitely one to remember,” Dorward said. “We had a great run going undefeated in league and making history in CCS playoffs rolling into three great wins in the state playoffs. The group of guys this and last season will always have a legacy at Paly. Making the NorCal finals back to back years and getting there by beating the No. 1 seed both times is incredible and will never be forgotten. Not only that but the way the fans supported us and came out to every game will always be remembered. No matter what, these last years playing at Paly will always be remembered for many years to come.”

Paly graduates nine seniors and all seven of its players that got minutes in the playoffs. Next year, the Vikings will look for leadership from juniors Jackson Chryst, Wes Walters and Marvin Zou.