Marchers of all ages join walkout against gun violence 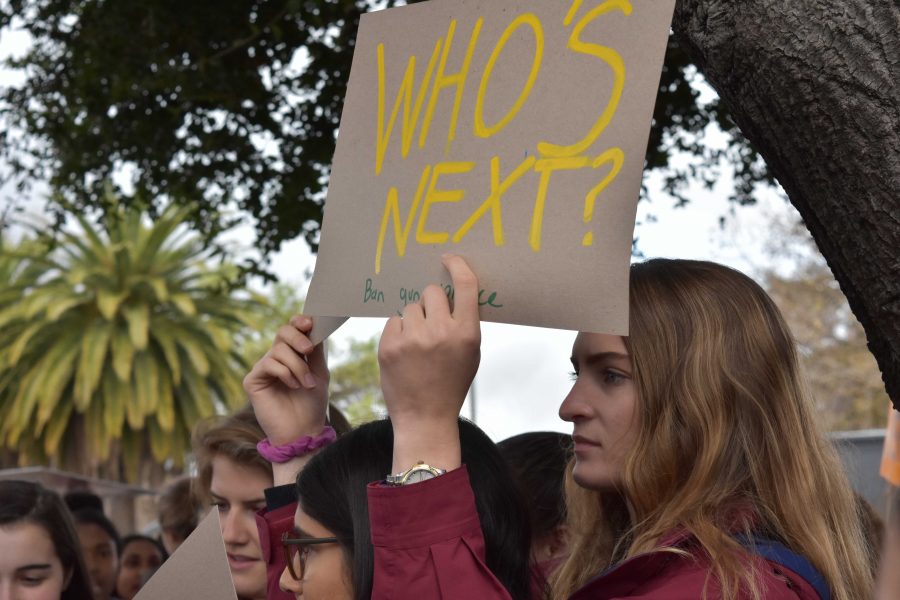 Vacant seats abounded at the start of third period classes yesterday as crowds of orange-clad students marched to the corner of Palo Alto High School in a 17-minute walkout sparked by national outrage against gun violence.

“I felt really proud that we all came out and supported this cause, because I think it’s really important,” Paly junior Ada Unal said.

The walkout followed a call for action from students in Parkland, Florida, who recently lost 17 members of their community in a school shooting. Organizers at Paly provided students with bright orange shirts reading “Enough is Enough” and calling for immediate gun reform. Junior Zoe Sid was among the students from Paly who organized the event.

“For me, when I started, it was really about making the student a present voice in all this,” Sid said. “I starting reaching out to people, trying to get as many people involved as I could.”

“I thought it [organizing the walkout] was really fun,” Wagner said. “Everybody was very dedicated, and it was fun to see how much energy there was in the school for people who really wanted to make their voices heard.”

Students met on the Paly quad at 10 a.m. before marching to the corner of Embarcadero Road and El Camino Real, snaking along both streets to hear speakers and join in chants of protest.

Speaker Laura Dachshund Pitchford recounted how gun violence has touched her life as well as the lives of those around her. Pitchford was among several speakers who relayed their opinions on gun control.

“It [gun violence] is not a political issue; this is a health issue and a safety issue,” DiBrienza said.

Although Paly Interim Principal Frank “Pancho” Rodriguez extended the brunch schedule to run until 10:10 a.m. to accommodate the many expected absences, many participants were still tardy upon returning to class. However, sophomore Kai Douglas said she felt that the opportunity to exercise her freedom of speech was worth being late.

“I think we need more gun control and I think it’s good for students to have a voice even before they can vote,” Douglas said. “Definitely worth taking the tardy.”

The national school walkout is the first of a slew of movements against gun violence in the United States. The next assembly planned is a nationwide march on Saturday, March 24, which will take place in San Francisco.