Boys’ basketball upsets No. 1 Heritage; to face Menlo on Tuesday 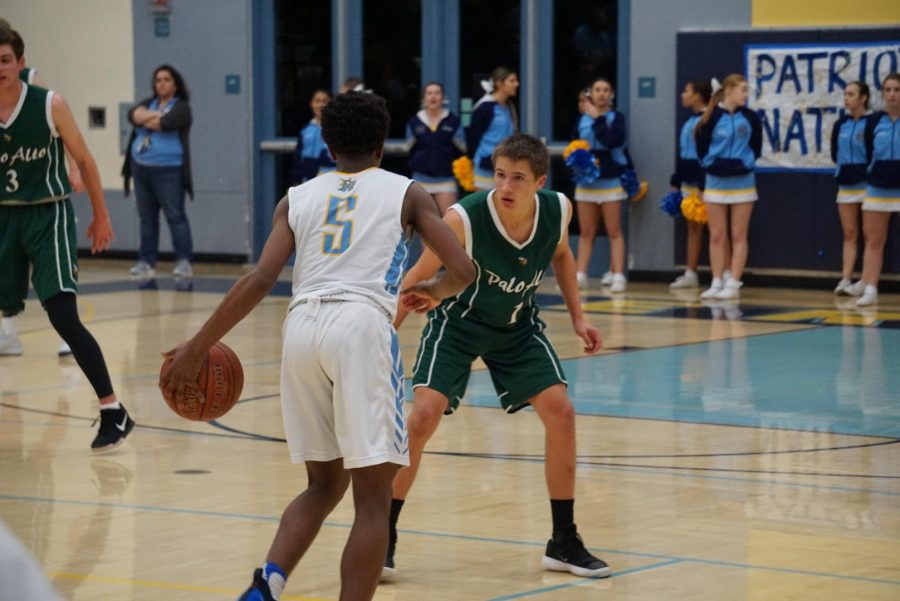 Senior guard Will Schmutz pressures Heritage player Ezra Manjon in the second half of Paly's Division I CIF State Boys Basketball Championships game on Saturday. The Vikings trailed for the better part of three periods, but began to click in the second half. "It shows just how good our basketball team has been over the last two years and that we have no fear about the teams we’re playing," Schmutz said. "We just love playing with each other and the seniors will always have a very special bond because of the things we have been able to do." Photo by Benner Mullin

History has a way of repeating itself in sports. For the second straight year, the Palo Alto boys’ basketball team (25-3, 12-0) has gone on the road to face the No. 1 seed in the Division I CIF State Boys Basketball Championships and emerged victoriously.

On Saturday, Paly traveled to Heritage High School (29-3, 10-0), ranked 10th in the state by MaxPreps, and clawed its way back from a nine-point second-half deficit to win, 59-49, and advance to the regional semifinal.

Paly trailed the majority of the first half, mostly due to Heritage’s Jacob Williams, who led the way for the Patriots with a team-high 18 points and connected on two three-pointers early in the first quarter.

On the other end of the floor, the Vikings were unable to find their shooting groove, and despite being an excellent three-point shooting team, only connected on two three-pointers the whole first half.

Down six at the end of the first quarter, 16-10, the Vikings relied on defensive tenacity to remain within striking distance of Heritage. Paly swarmed Heritage dribble penetration and crashed the defensive glass, preventing any second-chance opportunities for the Patriots.

According to senior guard Will Schmutz, the team tried to prevent Heritage from playing its usual style.

“We knew they had an explosive offense and we played our best defensive game of the year by holding them to only 49 points,” Schmutz said.

Heritage, who scored 100 points in a recent sectional playoff game, scored only 22 points in the second half of its contest against Paly.

The Vikings found their three-point stroke coming out of halftime and quickly erased a deficit that reached nine points. Senior guard Spencer Rojahn hit three triples in the quarter, to aid a Viking lead, 41-37, heading into the fourth quarter.

The final eight minutes belonged to Paly and senior forward William Schlemmer. Schlemmer scored 10 of his 13 points in the fourth quarter and put the nail in Heritage’s coffin. Heritage’s Williams hit his sixth three-pointer of the contest to cut Paly’s lead to just three points, but Rojahn immediately found Schlemmer streaking down the court for a layup and the foul. With the converted free throw, Paly led by six points with just 45 seconds remaining and the victory was never in doubt.

“Heritage started to play more desperate and aggressive defensively,” Schlemmer said. “Since they were doubling the ball a lot I would often get it in open space to make some plays and I just had to finish some easy shots.”

The Vikings are no stranger to this Menlo basketball team. The Knights defeated Paly in the Burlingame Tournament Championship back in December, 58-52.

“We are a completely different team now versus when we played them at the start of the season,” Schmutz said. “We have lots of confidence right now and know that Menlo is a very talented team and we must play our A-game.”

“They’ve rebounded really well since they lost to Mitty in the first round of Open,” Schlemmer said. “I think we have to make sure we don’t underestimate them and play with the same focus and intensity we have the past two NorCal games.”