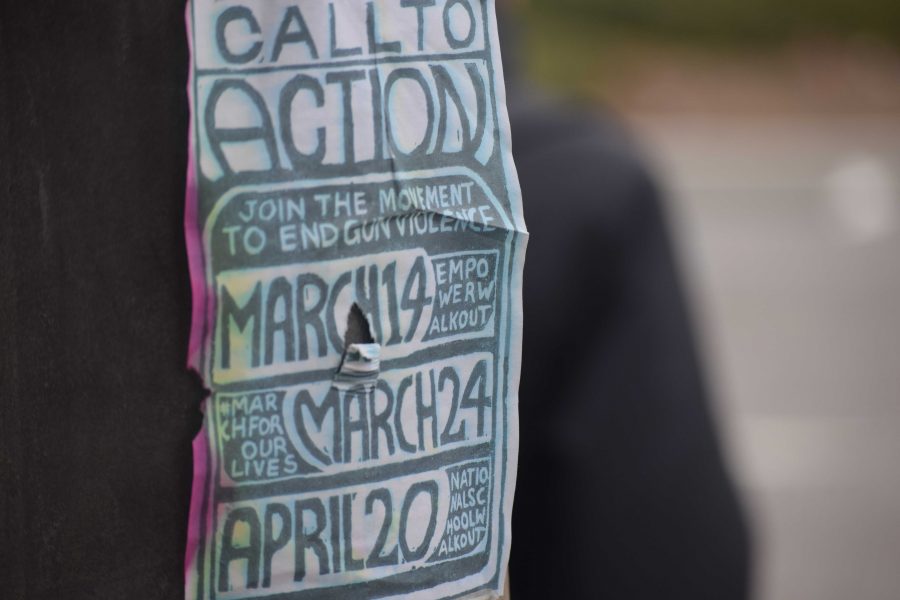 Surrounding Palo Alto High School, fliers advocating for upcoming protests about gun control have been put up by an unknown source. In addition to the upcoming walkout, a march on March 24 and walkout on April 20 are being planned. Photo by: Allie Feitzinger

Students across the country and within the Palo Alto Unified School District are planning to participate in a national walkout on Wednesday.

Scheduled at 10 a.m for 17 minutes — one minute for each person who died in last month’s Parkland school shooting — the walkout will be in support of stricter gun control and school safety measures.

One of the Palo Alto High School walkout organizers, activist sophomore Emma Donelly-Higgins, said the purpose of the walkout at Paly is to focus on gun violence.

“Our goal is to get as much attention as we can about this issue [gun violence] across the country,” Donelly-Higgins said.

Walkout organizers junior Zoe Sid, senior Louisa Keyani, and junior Warren Wagner said this movement in support of tougher gun laws has made the discussion surrounding gun control different because it is student-led.

Keyani noted how the recent rise in student activism surrounding the issue of gun violence is unprecedented.

“There hasn’t really been a movement like this [for gun control] where young people are at the forefront of it, and are the ones making their voices heard, and taking initiative, which is something that I have been really inspired by,” Keyani said.

Sid stressed the importance of taking part in protests as a youth.

“Having a youth run movement make it much more powerful, because it shows that we are aware of what’s happening and want to change it,” Sid said.

While many have attempted to push the conversation surrounding the Parkland shooting in the direction of expanding school safety, Warren emphasized that while this student activism stemmed from a school shooting, the movement is pushing for gun control that addresses the whole spectrum of gun-related violence.

“This has happened at concerts, churches, and happens in neighborhoods everyday,” Warren said. “Mass shootings get more attention, but gun violence as a whole in this country is just as big of a problem.”

Keyani added that stricter gun control would be a proactive rather than retroactive approach to preventing gun-related tragedies.

Wagner, who recently moved to Palo Alto from politically diverse Sacramento, said that engaging in activism is important regardless of whether you live in a politically homogeneous area or not.

“I think that a lot of people here think, ‘Our representative is going to be a Democrat since it’s Palo Alto, so what’s the point?,’ but I think it is important,” Warren said. “Not only just to give yourself a voice, but also to participate in the national movements, like this one against gun violence.”

Keyani, who helped organize the 2016 Palo Alto Peace March, said that Palo Alto students could be doing more in terms of activism, and noted the walkout as a good opportunity to get engaged.

“A lot of students in Palo Alto will talk about caring about an important issue and say that they want to participate, but once it comes down to it, you have to sacrifice something,” Keyani said. “Standing up for what you believe in is really important, and this [gun control] is an issue that affects all of us as students, because we want to feel safe in our schools.”

Though the walkout is led by students, Sid mentioned that this shouldn’t deter anyone who wants to participate.

“We also want to reach out to parents and other members of the Palo Alto community,” Sid said. “We want the community involved.”

Wagner is optimistic about student turnout.

“I definitely think that the energy is there, people care about this, so we’ll have to see how well we can get the word out,” he said.

In a March 9 newsletter, interim superintendent Karen Hendricks wrote that Palo Alto Unified School District students will not be subject to “punitive measures” for participating in the 17 minute protest, given that they comply with the time frame of the protest and act responsibly.

“Because guidance exists around these organized events, there will be no punitive measure for students who exercise their right to speech and activism during these 17 minutes.” Hendricks wrote. “That said, each school expects all students to conduct themselves safely and respectfully during this time.”

According to Paly’s Student Handbook, a student will receive a cut if they are absent for 30 minutes of class or more. If students choose to walk out for the 17 minute duration of the protest, according to the handbook rules, their tardiness does not constitute as a cut.

Assistant Principal Adam Paulson expressed that teachers must follow protocol in regards to participating in the walkout.

“If it’s instructional time, then their obligation by law is that they have to stay in the classroom with their students,” he said.

Keyani said that if there are no legislative actions taken as a result of the protest on March 14, she is prepared to organize around and participate in another walkout proposed by the grassroots activist group National School Walkout for April 20.

“From March 24th to April 20th, there is time for legislation to be proposed,” Keyani said. “And if nothing happens by April 20th, then we could say ‘we’re going to do it again, because you didn’t do anything the first time,’… it depends on the results from this one.”

Keyani brought up the significance of a politically mobilized Youth.

“Taking up an issue like this is important because we are the next generation of voters and leaders,” Keyani said. “Four million young people are going to be registered for the next election, which is larger than the margin that Hillary [Clinton] won the popular vote by. It could literally swing a presidential election. Yes, things do change slowly, but we are making an impact and we have our whole lives to do it.”