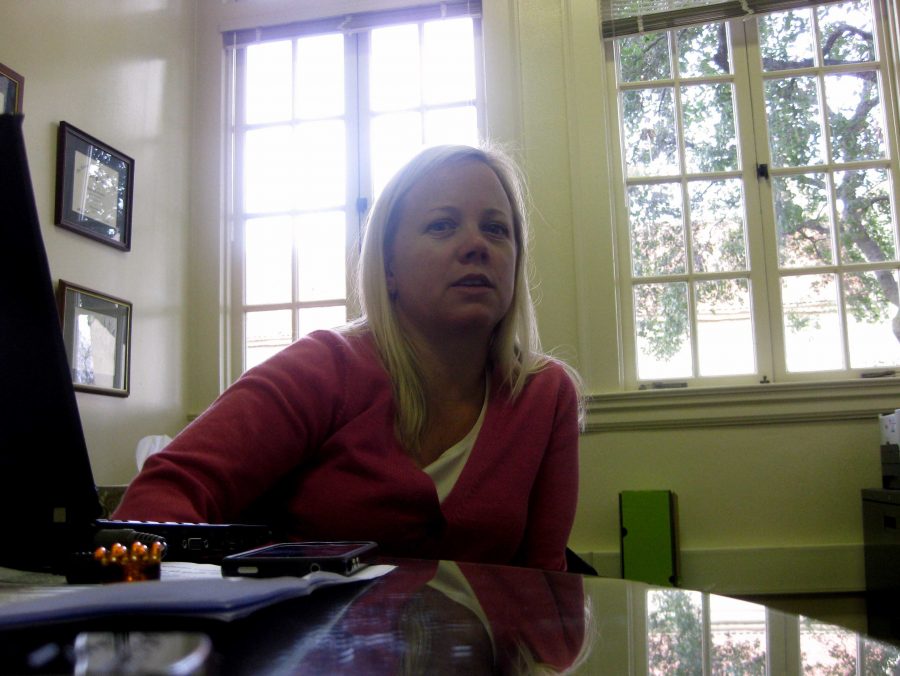 Palo Alto High School principal Kim Diorio announced her intent to resign at the end of the 2017-2018 school year in a message to staff, students and parents this morning. Assistant principal Adam Paulson said he is saddened by the news and that finding a replacement will be a monumental challenge. “[managing] A school like Paly requires that you have the whole package so that’s going to be difficult to find [in a new principal],” Paulson said. Photo: The Paly Voice.

The Palo Alto High School community is adjusting to news of Principal Kim Diorio’s intent to resign at the end of the 2017-2018 school year, after her announcement to students and staff at 10 a.m. today.

After 11 years at Paly and nearly five as principal, Diorio announced her decision in a letter to staff and a Schoology message to students and their families this morning, following pressure from local parents and a critical letter of reprimand from the Palo Alto Unified School District earlier this week.

The letter listed 11 criticisms of Diorio’s handling of a sexual assault report in 2016. The concerns included a failure to provide the “Complainant” with “the full range of procedural options available under Title IX, state law, Board policy and administrative regulations.”

While Diorio is currently on medical leave, she plans to return to work late this spring before making her formal departure.

Many in the community are shocked by the news. Student Activities Director Matthew Hall shared his strong sentiments about the circumstances with The Paly Voice.

“Put simply, I’m sad and I’m angry,” Hall said. “I’m at this moment mourning the loss of both a friend and a great coworker — someone who certainly supported me in my seven years as student activities director.”

Hall also expressed concern over his own future at Paly, in light of community pressure on Diorio.

While Hall and many members of the Paly community struggle with the news, some Palo Alto parents, such as Kathy Jordan, believe the resignation was justified.

“Being a school administrator is a position of trust and authority; Ms. Diorio, Laurence and Kim, and we think Mr. Paulson as well, have broken that trust,” Jordan stated in a message to The Paly Voice. “As parents, we have to have confidence long term in the highest level of accountability and transparency within PAUSD and that is not yet clear.”

Students have voiced mixed reactions on the resignation, ranging from frustration over the timing of the announcement, to surprise — and to a lack thereof.

“I just think the situation’s really weird,” junior Ashutosh Bhown said. “Why does she think it’s a good idea to do this amidst all this change? It’s like we won’t be coming back to the same school in August.”

Sophomore Frida Rivera said “It [Diorio’s resignation] feels like it was coming. I think that it’s not a huge surprise that she was resigning. It’s what’s best for her, I think.”

Hall attributes much of Paly’s progress in harboring an inclusive environment to Diorio’s presence on campus.

“If anyone has liked what ASB has done in the last seven years, if they like the kind of moves we’re making in terms of culture change and inclusion, if they like those things, well one of the reason those things happened is because of her,” Hall said. “It ain’t me, it’s the students and then the greater leadership and the greater vision.”

Hall also cited Paly’s recent Western Association of Schools and Colleges report under Diorio, which he described as “stellar.”

Assistant Principal Adam Paulson says the administration will need to adapt to Diorio’s departure. “She did a lot for pushing initiatives forward, so we’re going to try to pick up some of the bigger pieces,” Paulson said. “The schedule for next year — that’s one of the big focuses, and master scheduling — that’s huge. Those two pieces are going to keep us busy, I think, from now until the end of the year.”

According to Paulson, current Interim Principal Frank “Pancho” Rodriguez is unlikely to fill the permanent position next year. Finding someone to fill Diorio’s shoes will be challenging, Paulson said.

“This is a great school, and I don’t think [just] any principal can take the reins, so it’s going to be difficult to find somebody that has the charisma, and also has the intelligence, and also is very student-centered,” Paulson said. “Those three things I think are very hard to find in one person.”

Your browser does not support iframes. View the letter here: https://palyvoice.com/wp-content/uploads/2018/03/combinepdf.pdf