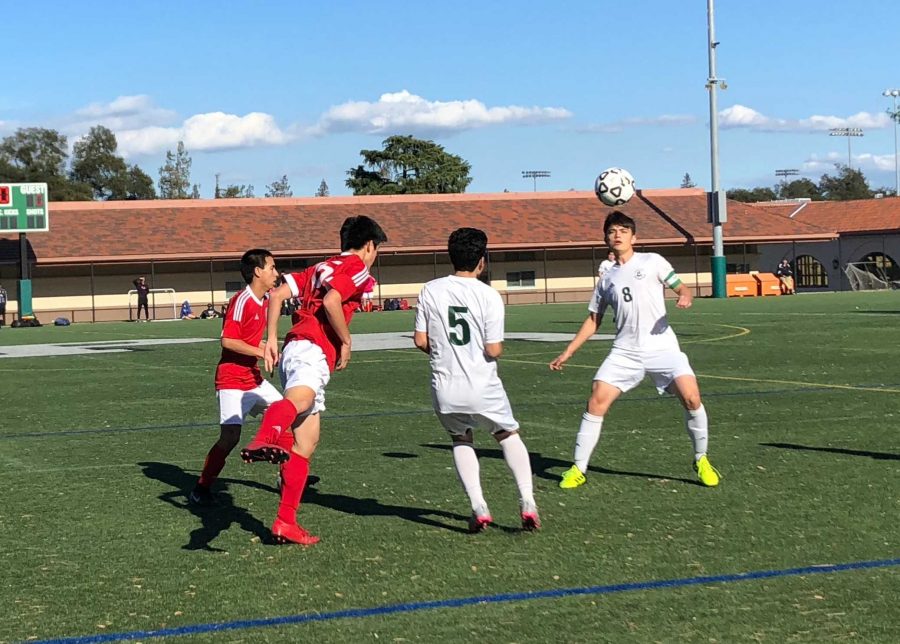 Senior captain center midfielder Xander Scherer heads the ball in an exciting match against rival Gunn High School (12-7-1, 9-3-0) on Wednesday at the Viking lacrosse field. This match resulted in a 2-0 win for Palo Alto High School. "I thought we fought hard and played the whole game with good intensity," senior captain centerfielder Matt Knowles said. "The boys put in good shifts and knew how much this game meant." Photo: Annika Behal.

“In the last game against Bellarmine, I thought we were [on] the better side, but a drop in focus led to two corner kick goals when we have only given up one corner kick goal the entire season,” senior captain centerfielder Matt Knowles said. “The only negative thing was we had a lot of injuries, which is always unfortunate.”

Coming into the season, the Vikings’ goal was to make it to the second round of CCS, as they lost in the first round in the 2016-17 season. This year they succeeded by making it to the semifinals.

Overall, the team did significantly better than last year in terms of its record and came out on top in numerous challenging matches.

“Matt and Xander put on a great show, [they] both played amazing[ly],” Van Zyll said. “They led us to a successful season.”

Knowles attributes the team’s success this year to inclusivity and hard work.

“The main thing that I liked about our team this season was how well we played together,” Knowles said. “I think that part of the culture Xander and I created was a very inclusive and fun environment where everyone felt loved.”

The team is losing seven seniors who each played a key role on the team and will be will be greatly missed next season.

“Next year I think it will be really interesting to see how the team turns out [because] we are losing a lot of good seniors,” Van Zyll said. “Hopefully we can all get better over the summer and grind so we can be good next year.”

Knowles looks forward to passing on the torch to future players next year.

“I hope the guys had an enjoyable experience this year, because that is what high school soccer is all about, having fun with your friends and playing for your school,” Knowles said. “I trust that next year’s captains will continue this fun tradition and the team can hopefully shine even brighter than they did this year.”