‘The Shape of Water’: An unconventional love story 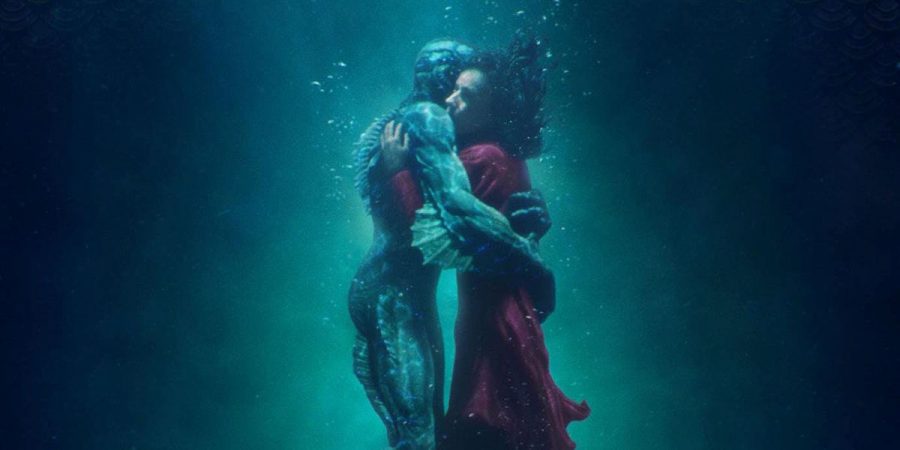 A scaled green creature rises up from the water. Gills down the sides of his neck pulse, and veins along his body light up in blue as he moves. Human-like in form, he stands tall on two feet. To some, this creature elicits fear and disgust. Others, however, are more curious.

Director Guillermo del Toro manages to seamlessly blend fantasy and reality in “The Shape of Water,” which has been nominated for 13 Oscar awards. Set during the Cold War, the movie follows Elisa (Sally Hawkins), a mute maintenance worker who works in a government laboratory, and her relationship with an unnamed amphibian man from South America (Doug Jones). Elisa tries to save the amphibian man as the American government races to beat the Soviet Union, which both want to take advantage of the amphibian man in the race to space. After a quick period of apprehension, these two unlikely characters are quickly attracted to each other.

Despite their characters being mute – or perhaps because of it – both Hawkins and Jones give powerfully dynamic performances. As the amphibian man slowly places his hand on Elisa’s roommate Giles’ (Richard Jenkins) head as a sign of peace, or leans against the tank to reach her, the viewer is easily empathetic to the creature. Similarly, Elisa’s tormented expressions and gentle interactions with the amphibian man tug at the viewer’s heartstrings, making Hawkins’ nomination for Best Actress well deserved. Hawkins’ facial expressions and gestures and Jones’ noises and body language show that powerful acting does not require words.

Octavia Spencer’s role as Zelda, Elisa’s colleague, has earned her a nomination for Best Supporting Actress. Witty and outspoken, Zelda repeatedly sticks up for Elisa, even when she is not sure she wants to. On the other end of the spectrum, Michael Shannon’s flat and unexciting role as Strickland, the primary villain, is the movie’s biggest disappointment. Strickland is a classic and cliched evil character, who will stop at nothing to defeat Elisa and kill the amphibian man.

Beyond the plot, “The Shape of Water” is an artistic masterpiece, from the music and cinematography to costume design. Sound is crucial in a movie whose two main characters are mute. From the tapping of an egg to the stomping of Elisa’s feet, some of the most important parts of the movie are communicated through the simplest actions. Nominated for Music Original Score, the film’s soundtrack is integral to the movie, not only serving as a plot device but also as a window into the characters’ emotions.

Sydney Wolinsky, who is nominated for Film Editing, and del Toro, who is nominated for Directing, work together to create a film that perfectly uses colors and lighting to set the tone. At the beginning, everything is colored in a subdued shade of blue and green. However, once Elisa meets the amphibian man, the first hints of orange and red light reflect on Elisa’s face, signifying her excitement and cheerfulness.

Luis Sequeira’s use of colors in the costumes mirrors that of the set design, reflecting the characters’ emotions. At her happiest, Elisa is draped in red, while for the majority of the movie her work uniform features duller greys and greens. While simple, Sequeira’s costume design, which has been nominated for an Oscar in Costume Design, also captures the Cold War time frame well.

Touching on motifs of power, silence and loneliness, “The Shape of Water” beautifully depicts the journey of two isolated characters in the margins of society who find company and happiness in each other. From its astounding cinematography and acting to creative and original screenwriting, “The Shape of Water” is certainly deserving of its nomination for Best Picture.

“The Shape of Water”