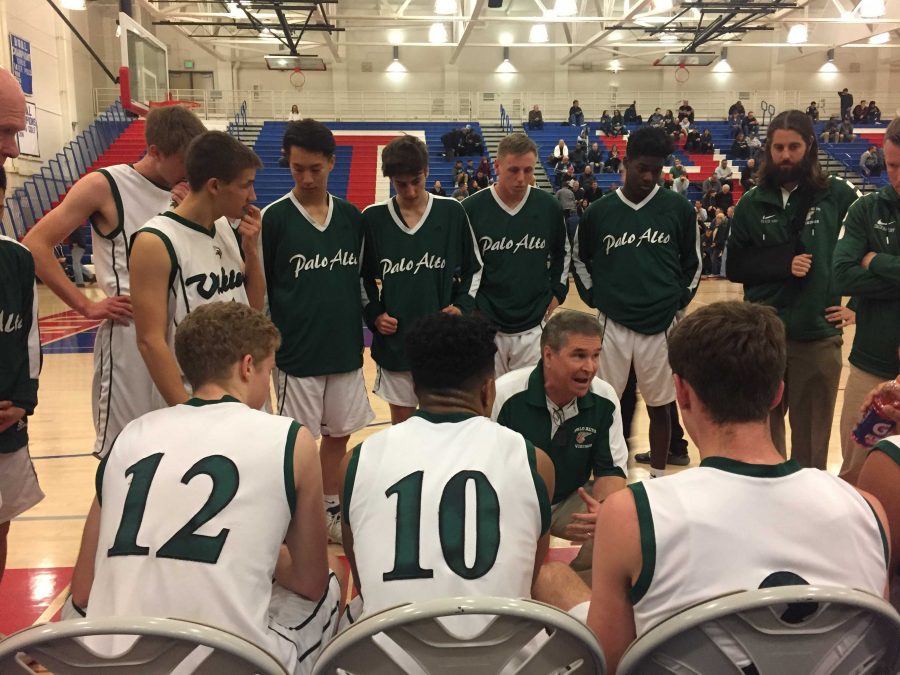 Viking senior guard Will Schmutz hit a three-pointer on the Vikings’ first possession of the game, but Mitty scored a pair of transition baskets to take the lead and never looked back.

Mitty junior guard Joseph Vaughn led the second part of the two-headed scoring attack for the Monarchs, pouring in 23 points, getting the Monarchs going with eight in the first quarter.

Palo Alto kept the game close throughout, responding to each Mitty scoring run with one of their own, but was unable to pull ahead in the uphill battle and trailed 33-30 at the break.

The Monarchs staved off every Paly attempt at a comeback with near perfect three-point shooting. Mitty sophomore Devan Sapp led all scorers with 27 points, including eight three-pointers, with five coming in the second half.

“We stopped their main guy who has been their leading scorer all year, but as a result, we left some of their shooters open for some easy threes,” Dorward said.

Senior forward William Schlemmer gave one of his best performances in one of his best games of the year for the Vikings, contributing 12 points, five rebounds and helping senior forward Bryant Jefferson put in a strong defensive effort on Grigsby. Viking senior guard Paul Jackson III also put in a strong performance off the bench, contributing 11 points and three rebounds.

Despite the spot-on shooting performance from the Monarchs, Paly fought hard and remained close, down only five points with five minutes remaining in the contest, thanks to Doward, who scored 19 of his team-high 21 points in the second half.

“They were a physical team so in the second half I looked to be more aggressive and drive to the basket to draw fouls,” Dorward said. “I also tried to look for more easy buckets on transition.”

However, the Vikings were ice cold from beyond the arc, and in the fourth quarter, their shooting woes caught up to them. Sharpshooting seniors Jared Wulbrun and Spencer Rojahn were not on their games, only combining for five points and one three-pointer, after scoring a combined 32 points against St. Ignatius.

Mitty was able to pull away in the closing minutes with a final few transition three-pointers and the eight-point victory. The Monarchs move on to play Bellarmine High School  (23-3, 13-1) at 8 p.m. Friday at Santa Clara University. Bellarmine’s only loss in West Catholic Athletic League play came against Mitty.

With the loss, Paly now looks to the CIF State Boys Basketball Championship. As a qualifying team for the CCS Open Division, the Vikings were automatically entered into the state tournament, where the Vikings will likely obtain a low seed and a home game in the Division I bracket.

Schlemmer said he believes there is room to improve before the state tournament next week.

“What we can improve on as a team is sticking to our offense and not feeling like we have to create by ourselves every time down the court,” Schlemmer said. “Our offense is designed in a way that it wears down our opponents as the game goes on, but if we shy away from running it then we don’t get as many good looks.”

The Vikings will learn who they play and where they are seeded in one of the CIF brackets on Sunday, and will likely have a game on Wednesday.

Schlemmer says he knows the team will make the most of their final games of the season.

“We are going to try to be making a statement every game because from now on it’s win or go home.”