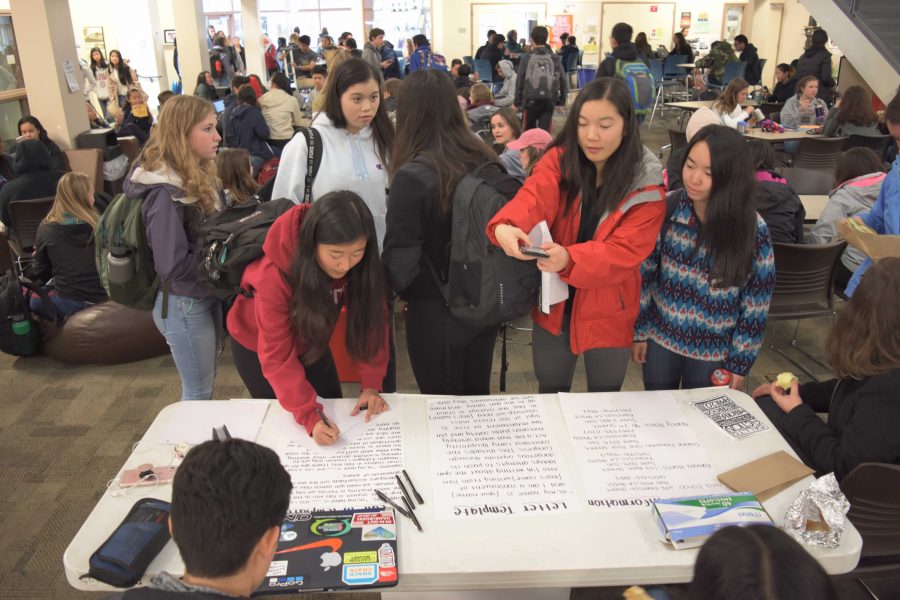 In light of the recent school shooting in Parkland, Florida, a group of Palo Alto High School students are organizing a series of events ranging from walkouts to a letter-writing campaign in order to honor victims of the massacre and pressure the government for reform.

According to senior Noga Hurwitz, one of the organizers of the events, Paly’s response to the shooting at Marjory Stoneman Douglas High School will incorporate both nationwide and local activities.

“We’ve organized a multitude of events that are in alignment both with national response to the shooting at Stoneman Douglas as well as in partnership with the coalition of organizers all across the Bay Area,” Hurwitz said.

Students kicked off the activities last week with a letter-writing and calling campaign.

“We’re having a letter-writing and calling campaign to elected officials in the MAC, where we have templates for you, we have textbot information and anyone can go participate and send letters to Congress,” Hurwitz said.

Though the organizers of the campaign are not expecting responses to their letters and calls, they hope that flooding Congress with student voices will demonstrate the need for political reform. According to junior Zoe Sid, another student organizer, one of the ultimate goals of the campaign is to pressure Congress for change.

“We’re hoping that these letters … will help them [members of Congress] understand that we’re afraid and we don’t feel safe at school,” Sid said.

Sid said that the letter-writing campaign will continue into next week as well. In addition to contacting representatives, on March 14, a group of Paly students will participate in a nationwide walkout.

“Students will be walking out of the classroom for seventeen minutes in commemoration of and in memory of the seventeen kids and teachers who lost their lives [at the Parkland shooting] but also as an action of a protest to get the attention of legislators and people who are making decisions,” Hurwitz said.

The walkout will begin at 10 a.m. and may involve students from Stanford University and Castilleja School in addition to Paly students and staff.

At lunch on the same day, the team of organizers is planning a voter registration drive in which local elected officials will be on campus to help students over the age of 16 pre-register to vote. Hurwitz hopes to incorporate music and festivities into the drive to engage students in the process.

“Our hope is to make the Quad feel lively and exciting, because of the music but also because of the prospect of the impact we’ll make either now if we’re 18 or in the future with our vote,” Hurwitz said.

The organizers also plan to participate in “The March for Our Lives”, a national protest on March 24. Protestors will congregate in cities across the country including San Jose, Sacramento and San Francisco. According to Hurwitz, the Paly delegation will march in San Francisco or San Jose.

“The night before we’re going to have a poster-making party, so any Viking who wants to show out can come and engage in the process,” Hurwitz added.

A third nationwide protest will take place on April 20th, though it has yet to be determined whether Paly students will be involved.

Both Sid and Hurwitz urged interested students to join their efforts to create a safer school environment.

“We are in a really exciting moment in history where people are finally taking these events at more than face value and demanding action,” Hurwitz said. “As young people ourselves and as Vikings, we…feel like it’s really important for Paly to get involved.”

Hurwitz is optimistic that the efforts of Paly students, combined with those of teenagers across the country, have the power to inspire change within the government.

“I really just think there’s something special about our generation,” Hurwitz said. “That’s why we’re seeing change now, and people are listening.”