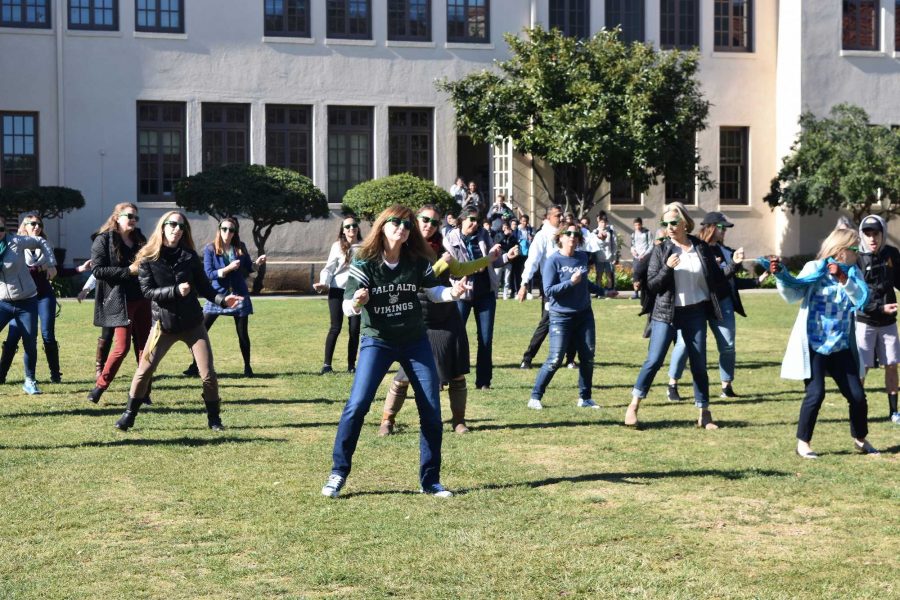 Dylan Zou and Evan Baldonado
A group of 28 staff members danced to Bruno Mars’ “Uptown Funk” on the Palo Alto High School Quad during brunch last Tuesday and many are asking when the next performance will be.

The purpose of the event was “to bring joy and laughter and smiles to Paly students,” Jennifer Gardiner, said.

Grant Blackburn, a history and social science teacher at Paly, initiated the flash mob with a guitar solo, setting the high-energy tone of the event. Blackburn is a veteran guitar player, having played the instrument for over 24 years.

“I became involved when teacher Korynne Headley asked me to do the guitar intro […] to attract a crowd around the Quad so that they would see the flash mob,” Blackburn said. “I thought the event was fun and a great way to spread some positive vibes on campus. I would definitely do it again.”

The performance was well received by students who welcomed its light-hearted atmosphere.

“I thought it was something goofy that the teachers could do,” junior Ethan Nissim said. “It was fun to see everyone having such a good time, whether they were participating or just watching.”

Both students and staff alike enjoyed the event and many are asking when the next flash mob will be.

“It would be a surprise,” Gardiner hinted.