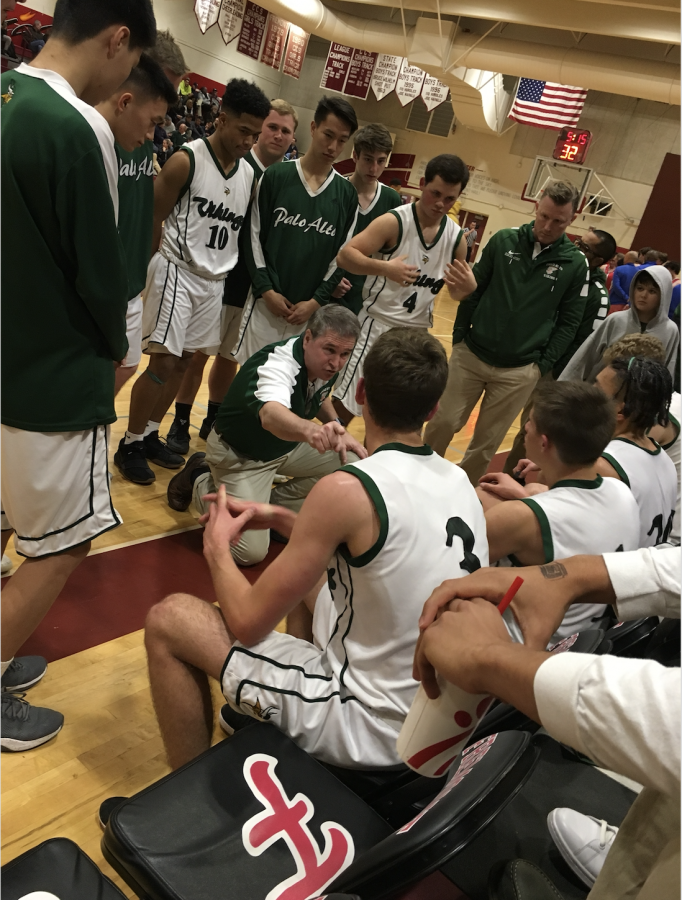 All week leading up to the first round games of the Central Coast Section Open Division Tournament, the record 0-15 was featured across various Bay Area publications. 0-15 was the record of public high schools in the first round of the boys’ basketball CCS Open Division games since the open division was created, but following Friday night, that record is now 1-16. After a back and forth battle through three quarters, it took an explosive 27 point fourth quarter performance from the Palo Alto boys’ basketball team (23-2, 12-0) to defeat the St. Ignatius Wildcats (16-9, 9-5), 75-60, and become the first public high school to advance from its first-round game, ever.

The Vikings went down early, falling behind in the first quarter after Saint Ignatius guard Darrion Trammell hit two deep threes. Senior forward Max Dorward had six of the Vikings’ 16 points in the first, breathing some life going into the second period.

The game continued to be a battle for the next three quarters. The Vikings extended their halftime lead of two points to 10 with about five minutes to go in the third quarter, but the Wildcats fought back, with a big three by junior guard Wrenn Robinson cutting the Viking lead to just four points.

Up six points heading into the final period, the Vikings were ignited by senior guard Jared Wulbrun, who lit up the Wildcats for 10 of his 16 points in the fourth quarter.

Wulbrun has been hot as of late, posting back-to-back games with four or more threes. He credits it to change in his shooting form.

“A little has changed of late for me,” Wulbrun said after the game. “I was bringing the ball to the left side of my body so I made a tweak and brought back to where it’s supposed to be and it made a big difference.”

Dorward said that the Vikings game-planned primarily on defense, to slow the Wildcats’ high powered attack.

“We knew they were a very high caliber offensive team so we knew we had to step it up on defense,” Dorward said. “They had a couple main guys we knew we had to stop, their point guard and one of their shooters. We also had to prevent their big man from getting easy buckets off the pick and roll. Their defense wasn’t the best so we knew if we continued to do what we’ve done all season on the offensive side we would get shots we wanted.”

The victory is especially sweet for Paly, considering its narrow miss of the tournament last season coupled with the doubts cast by the media and the West Catholic Athletic League’s St. Francis High School head coach Mike Motil, who voiced his outrage to the San Jose Mercury News on being seeded behind Menlo and Paly.

“The people on that committee don’t care about the WCAL, plain and simple,” Motil said. “All they cared about was themselves. There is one WCAL coach on there and there is a bunch of other people that don’t give the league any respect. What are you going to do about it? There is nothing you can do about it. To be honest with you, shame on the CCS committee, the committee of coaches that did that. It just was wrong.”

The Vikings have their next game on Tuesday against Archbishop Mitty at Independence High School at a time to be determined.