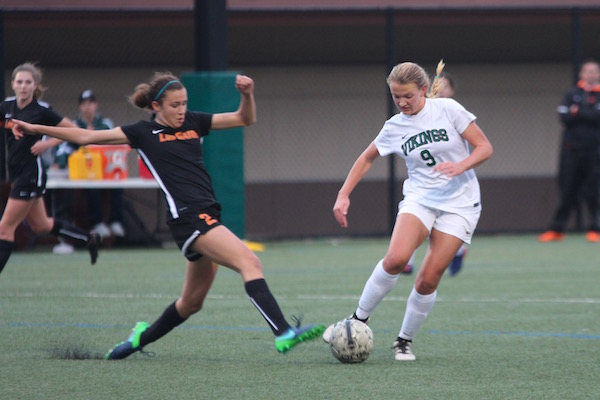 The Palo Alto High School girls’ soccer team (12-4-2, 8-2-2) will have their first playoff run beginning with a matchup against the Pioneer High School Mustangs (15-1-4, 10-1-3) at 5:30 p.m. tomorrow at Pioneer High School. For the last two seasons, the Vikings have lost in the Open Division quarterfinals of the Central Coast Section playoffs. This season, they are looking to turn things around and advance in the tournament.

Despite the rocky end to league play, Paly finished second in league, just behind Mountain View. Earlier in the season, Paly handed the Spartans its only loss on the season.

The Vikings will enter the tournament as the 4th-seed and need to play strong on both sides of the ball.

According to senior midfielder Emily Tomz, the Vikings are practicing all of their techniques and skills in preparation for tomorrow’s game against Pioneer.

“In preparation for the game Saturday, we are working on every aspect of our game: defense, possession and shooting,” Tomz said. “At practice we’ve been able to play larger scrimmages since we have the whole field to ourselves now. These drills are great because we haven’t played a real game in a week, so it’s good to get everyone on their toes and in a game-like environment.”

Paly’s biggest threat will be Pioneer’s powerhouse midfielder Naomi Girma, who signed to play Division I soccer for Stanford University.

“We’ve also been working on penalty kicks every day,” Tomz said. “A tie would lead to a penalty kick shoot off, so we need to be confident in that high pressure environment.”