‘Get Out’: A shocking psychological horror film 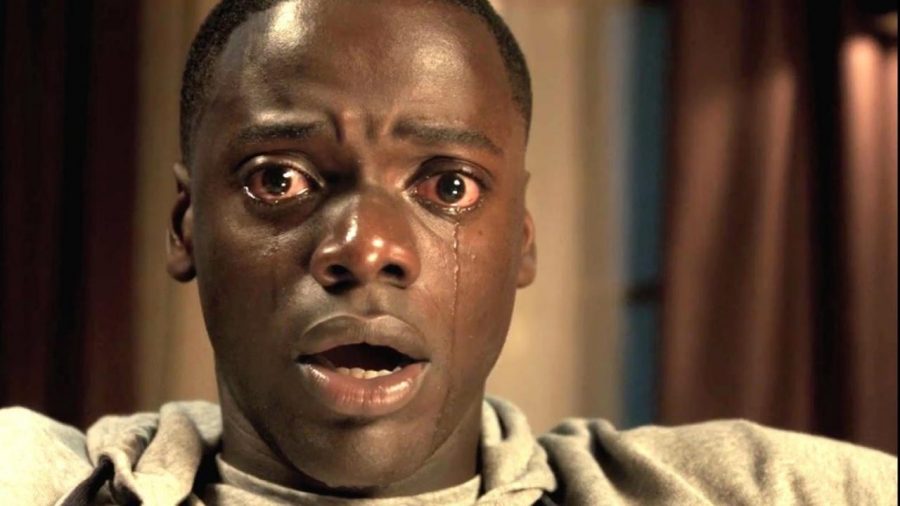 Director Jordan Peele masterfully and unconventionally covers important issues of race relations through his Oscar-nominated psychological horror film, “Get Out.” With disturbingly creepy scenes and shocking turns, Peele uses a fictional allegory that traces the story of an African-American man meeting his Caucasian girlfriend’s family to highlight many issues about interracial relationships.

In the film, Chris Washington’s (Daniel Kaluuya) girlfriend Rose Armitage (Allison Williams) introduces Chris to her family. Chris intially is anxious, being an African American in a white household; however, he becomes more comfortable with the family when they welcome him with open arms. As the story progresses, many strange comments and shocking events occur that cause Chris to slowly become concerned with the unusual Armitage family. In the end, Chris finally realizes a shocking secret and must find a way to escape his untimely fate.

The plot turns from what would initially be considered a normal, happy interracial relationship to a haunted and creepy story about a mentally deranged family. The dialogue from the characters shifts from being casual and friendly in the beginning to creepy and unsettling as the movie progresses. The tone also dramatically changes: from a care-free, genuine vibe to a dark, frightening feeling. With this shift, the audience feels the same feeling of unsteadiness that Washington feels as he is interacting with the many suspicious characters.

While Peele is new to directing in the filming industry, many of his employed filmography tactics would prompt audience members to think otherwise. From utilizing the basic jump scare for maintaining a shocking, suspenseful feeling to defining underlying sarcastic tones to further emphasize subtle hints at the unraveling of the plot, Peele effectively combines the topics of the unsettling implications of race, dark humor, and dramatic irony.

Despite Peele’s phenomenal directing in the film, the highlight of the film is the brilliant acting from actors such as Kaluuya, Williams, and Lakeith Stanfield.

One of the shocking twists in the movie is that beyond the seemingly friendly family gathering, the white people are trapping unsuspecting black people in their bodies for the former to essentially restore functions they have lost from disabilities or simply because they are nearing death from age.Therefore, many characters in the movies had scenes in which they had to immediately switch personalities; actors such as Stanfield, Betty Gabriel, and Marcus Henderson all did fantastic jobs.

One of the biggest accomplishments of the movie is definitely the profit the movie was able to make with the limited budget the crew was working with. The crew had a budget of $4.5 million and had box office sales of $255 million, according to the Box Office Mojo hyperlink. Many films that have worked with budgets over $50, $100, and even $200 million still struggle to even get near the ticket sales that “Get Out” yielded.

In addition to a well-crafted plot that consistently captures audience interest, the film encompasses deeper implications about the issue of race that are magnified through acting.

“Get Out” encompasses a unique plot, complex characters, and increasingly relevant themes to assemble a well-crafted film that succeeds in appealing to a wide range of audience. In identifying  topics such as the social aspects of race and culture in everyday life, Peele creates a massive box office success and an extremely well-received horror film