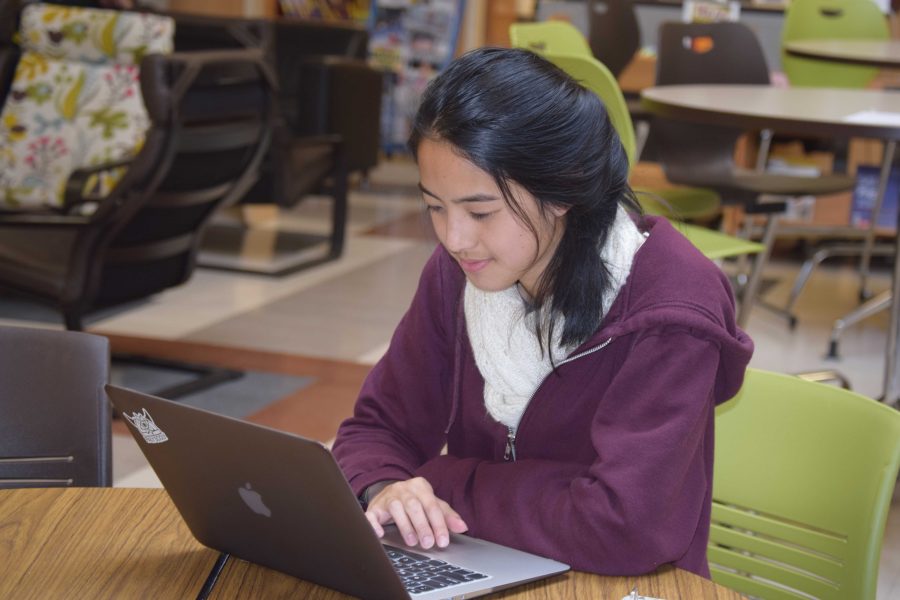 Senior Celine Wang, co-captain of the Paly Scioly team, hopes to lead the team to Nationals this season. This feat would first require a first place finish at States. "Personally, I’ve never made it, but back in 2013 a team made it to Nationals," Wang said. Photo: Micaela Wong

Paly’s two teams, the Green team and the White team, placed 7th and 29th out of the 49 teams in attendance.

According to one of the co-captains, senior Celine Wang, the contest was low-stakes and considered practice for future regional and state events. However, this did not diminish the competition level as skilled teams from around the country, including Southern California, Georgia and Pennsylvania, attended the event.

Wang said that although the Green team finished in the top 10, they were “pretty disappointed” with the end results and had had “higher expectations” for their overall ranking. With only a few points separating the top placing teams, each event greatly impacted the overall scoreboard.

“When you look at the scores, between 3rd and 7th, we were all pretty close,” Wang said.

The regional competition is next on the agenda. In past years, Paly Scioly has typically performed well at Regionals and are currently the reigning champions.

Although the team is “very strong all around,” Wang said this past weekend’s competition brought attention to the events that still need improvement.

“There are are a few events that we didn’t do super well in which basically hurt our overall average, but those are all very fixable,” Wang said. “Between now and Regionals we know exactly where we need to work on.”

A top four finish at Regionals would allow the team to compete at the state competition. A first place finish at States would then be needed for the team to advance to Nationals, where they would face the highest level of competition. With Paly’s most recent appearance at Nationals being five years ago, the team is more than ready for another berth.

Along with the team’s goals, Wang has individual aspirations as well. As a senior, she hopes to enjoy her final season of Scioly, which she has participated in since freshman year.

“It’s going to be my last season on this team, so I want to see how far I can make it,” Wang said. “After this there won’t be any more competing, so I want to see if I can push myself to do the best in all my events.”