An alternating schedule would harm extracurriculars 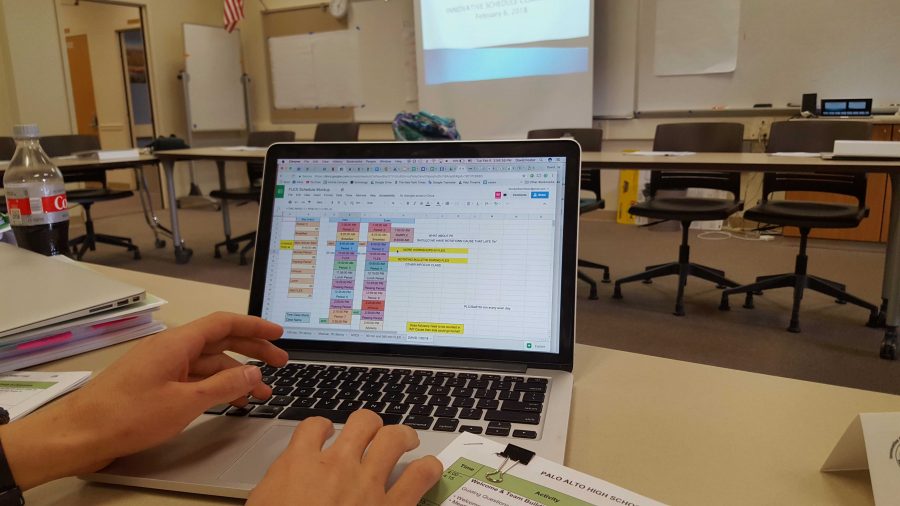 Junior David Foster, a coordinator for the community outreach subcommittee of the Palo Alto High School Innovative Schedule Committee, opens a Google spreadsheet with potential schedule plans. The group recently identified a certain schedule framework that it plans to use but has yet to decide upon a complete schedule recommendation. “We will hopefully reach consensus on a final schedule in the meeting [two] Tuesdays from now,” Foster said. “Until then, nothing is decided as we’re pushing on the pros and cons of different schedule tweaks.”

Though everyone has heard the idiom “saved by the bell,” the expression “harmed by the bell” is not quite so common. However, if some of the potential bell schedules that are currently under consideration are codified, we might just need to put the latter phrase into use.

Recently, the Innovative Schedule Committee (ISC)—a collaborative group consisting of both students and staff—announced that it had narrowed its long search for a new schedule system and is strongly considering a certain type: one that has no C-days. This decision is not final, yet.

One such schedule that is up for selection is:

No more having to deal with seven periods in a single day. Sounds great, right?

Though the elimination of C-days may be cause for celebration for many students, we must not ignore the potential implications of switching to an alternating-type schedule.

Presently, Paly’s schedule is a fixed schedule. This means that each day will end at a certain time. Mondays, Wednesdays, and Fridays all finish at 3:30 p.m. every single week. Tuesdays end at 2:50 p.m. and Thursdays end at 2:35 p.m. With the exception of Advisory, the schedule is identical across weeks; the dismissal times remain constant.

With the new proposed schedule type, however, the schedule would no longer be consistent.

If we were to start the week with an odd day one week and then have an even day the next, the later days of the two weeks would be fundamentally different under this alternating-day system. As a result, we could see days ending at different times depending on the week; a day that ends at a certain time one week might end an hour later the next.

Why is this an issue? Though it may seem inconsequential, a difference in end times of less than an hour would impact students in negative ways.

It is logical to assume that many school-linked activities that begin after the school day will adapt. They could move to start later every week, or they could simply start at different times each week.

But the real issue here is the activities that are incapable of changing time frames.

One example is outside extracurricular activities including music groups and outside non-Paly affiliated sports. Such activities may not bend their schedules to accommodate the needs of Paly students.

As a result, the students involved in such activities may be forced to sacrifice extracurriculars that are meaningful to them due to these time inconsistencies across weeks.

Another example is student-led clubs at Jordan Middle School. Currently, on Thursdays, Paly students manage and direct a debate club, a Science Olympiad club, and a programming club at Jordan.

If Paly were to be let out as late as 3:30 every other Thursday, it would be physically impossible for students to arrive at Jordan by 3:00 every week to lead the clubs that they are hosting.

“Before we could have easily gotten to Jordan on time for their release on a Thursday, as we would have gotten released earlier, and we still would have time to prepare” junior Annie Tsui, co-director of the Jordan SciOly club, said. “If we had an alternating block schedule, Jordan would either get out of school earlier than us and would have to wait or we would barely have enough time to rush over there without preparations or anything.”

Clubs such as the Jordan SciOly Club are an important way of involving and educating younger students and introducing them to potential passions to pursue during their high school years and beyond. If these clubs were to be abandoned, it is likely that their respective Paly clubs and teams could see reduced membership in the future.

When we consider the potential impacts of a bell schedule change, we must look at its effects not just on Paly students, but on our entire community at large.

We must consider that these kids are our future; they will be the ones populating Paly in the future and they will be our leaders.

By switching to an alternating schedule, we will inadvertently harm the rich extracurricular culture that is a defining feature of Paly’s campus atmosphere.

It is imperative that we minimize any shifting of school dismissal times across weeks to protect our community from any unintended consequences.

Note: The author of this opinion piece leads the Jordan Debate Club and will be attending the ISC meeting on Feb. 13 to advocate for a non-alternating schedule.