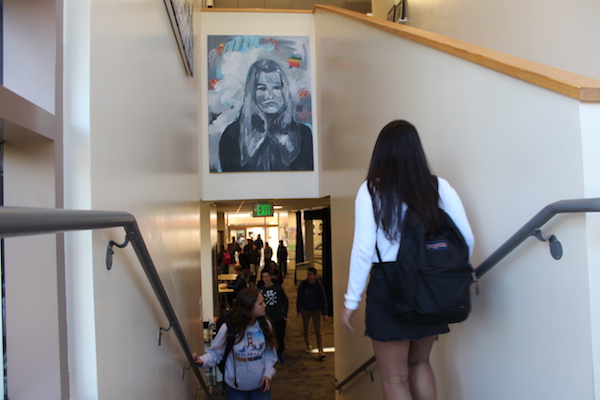 Paly students pass under one of Golden-Globe winning Paly alumnus James Franco’s paintings displayed above a stairwell in the Media Arts Center. After five separate allegations of sexual harassment and misconduct arose against Franco last week, students and parents are concerned whether his artwork has a place on campus. “I don’t want to overreact and I want to be very thoughtful,” said Principal Kim Diorio. “At the end of the day we need to make sure our school is safe for all students.” Photo: Sophia Muys.

Following a set of sexual harassment and misconduct allegations against Palo Alto High School alumnus James Franco, Principal Kim Diorio said in an interview Monday afternoon that she is struggling to determine the future of the Golden-Globe winner’s artistic contributions to the campus.

Diorio decided to have workers paint over the remaining mural on the school’s Student Center, a process which began today, while leaving the paintings inside the Media Arts Center untouched.

“I made the decision we’ll take down the mural on the Student Center because I think that’s the one that’s most visible to the outside community,” Diorio said.

Diorio said the paintings and mural were temporary contributions to the campus in 2014, when Franco spoke and debuted an experimental film at the 2014 opening of the MAC, an event that raised $7,000 for the Paly MAC boosters.

“When we were opening the MAC we wanted to do a big celebration,” Diorio said. “Nothing was intended to be permanent. Even his artwork is still considered to be ‘on loan’ to us.”

Diorio said she plans to leave the future of the paintings in the MAC to the discretion of the Paly media arts community.

Franco has been an active contributor to Paly media arts, sat for special interviews with various student publications over the years, and taught a weekend film workshop in the 2015-2016 school year on campus.

“I know that he credits … The Campanile [student newspaper] to his success as a student and to teaching him a lot of important life skills,” Diorio said. “When he was here [for the opening of the MAC] it was under a very special circumstance. He was helping us celebrate the opening of that building.”

According to Diorio, who said Franco was “kind” for donating his time to paint the mural, justifying the removal of his artwork is difficult and inevitably controversial because he has not been convicted of a crime.

“These are still allegations,” Diorio said. “I can’t even say it [the decision to replace the mural] is based on fact because he’s denied those allegations and hasn’t been charged with a crime.”

Paly journalism teacher and Campanile adviser Esther Wojcicki, who said she enjoyed teaching Franco from 1993 to 1996, said he is a kind man who deserves the chance to explain himself. According to Wojcicki, the allegations seem out of character for Franco.

“Mr. Franco I think is a very caring person and he is interested in giving back to the school and education,” Wojcicki said. “I think there is always two sides to a story and I really don’t know his side of the story at this point.”

Wojcicki said that taking down Franco’s artwork would be acting in haste, as his critics are taking allegations, which he has denied, for fact.

“Give him the benefit of the doubt,” Wojcicki said. “That’s the way it’s done in America. You aren’t guilty until you’re proven guilty.”

Despite her reluctance to act before hearing Franco’s explanation, Wojcicki said she supports Diorio’s choice to paint over the mural.

“I think Kim Diorio was under a lot of pressure to remove the mural and so she had to,” Wojcicki said. “I support her decision but I still think that we are all overreacting without giving James a chance to defend himself.”