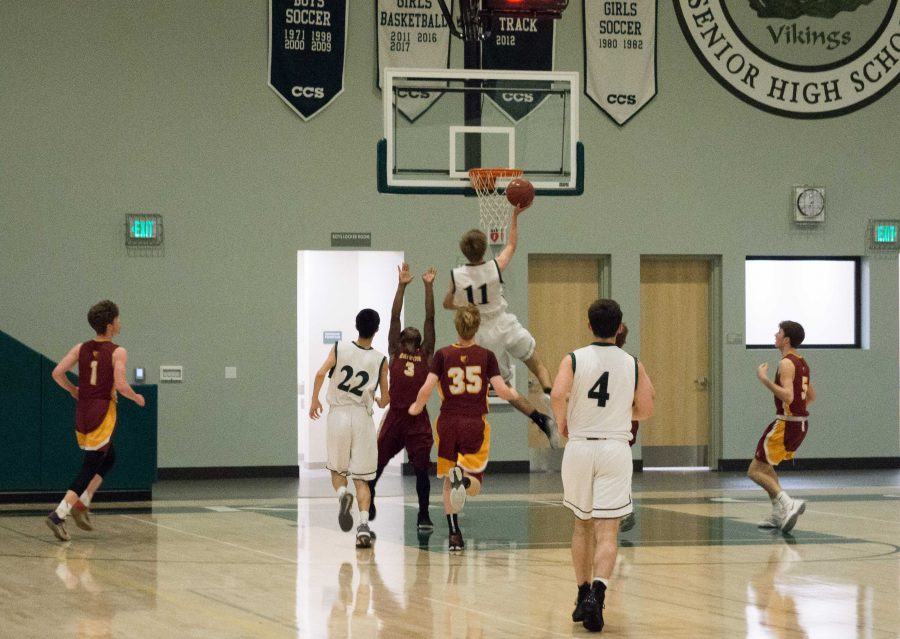 Senior forward Max Dorward, who led Paly with 17 points, shoots a layup over a defending Menlo-Atherton player. The Vikings played stout defense all night and attacked the paint on offense, resulting in a 57-41 win at the Peery Family Center. "We played our usual man defense and we bothered M-A’s rhythm on offense," head coach Peter Diepenbrock said. Photo: Finn Mennuti

The Vikings avenged their decisive loss to the Bears last season, which effectively knocked the boys from CCS Open Division Tournament consideration.

Each year, the top eight teams from CCS qualify for the Open Division, the highest ranked tournament, and last year Paly was ninth. With an undefeated league record thus far and quality non-league wins, the Vikings are in a prime spot to be selected for the Open Division Tournament.

According to head coach Peter Diepenbrock, Paly used last year’s game to motivate itself for this season’s contest.

“We thought we were the better team last year but we played one of our worst games of the year,” Diepenbrock said. “We wanted to make sure we played well.”

“We knew that this game was huge regarding the playoff picture and the possibility of us making open,” Schlemmer said. “We definitely felt like we had something to prove.”

Palo Alto was relentless on defense, limiting Menlo-Atherton to four points in the first quarter and 16 at the half.

In the second quarter, senior guard Spencer Rojahn opened the game up with a triplet of threes, extending Paly’s lead to 13 points at halftime, 29-16.

The Vikings maintained composure and never allowed the Bears to feel like they could come back. Palo Alto’s lead remained greater than ten points the rest of the game, finishing 57-41.

Paly used quick ball movement to keep the M-A defense on its heels and capitalize on missed assignments for layups and open shots.

“We knew that this game was really important for our playoff resume,” Schlemmer said. “We definitely wanted to play high-pressure man to man defense and put their ball handlers in a tough spot and I think we did a good job of making them uncomfortable.”

With the win, Paly is in an excellent position to qualify for the CCS Open Division Tournament, a feat it narrowly missed last season.

“This win keeps our hopes alive to make the Open, but doesn’t guarantee anything,” Diepenbrock said. “For the second half of league we will focus on getting better in all our areas we need improvement on like rebounding, ball handling, offensive execution.”