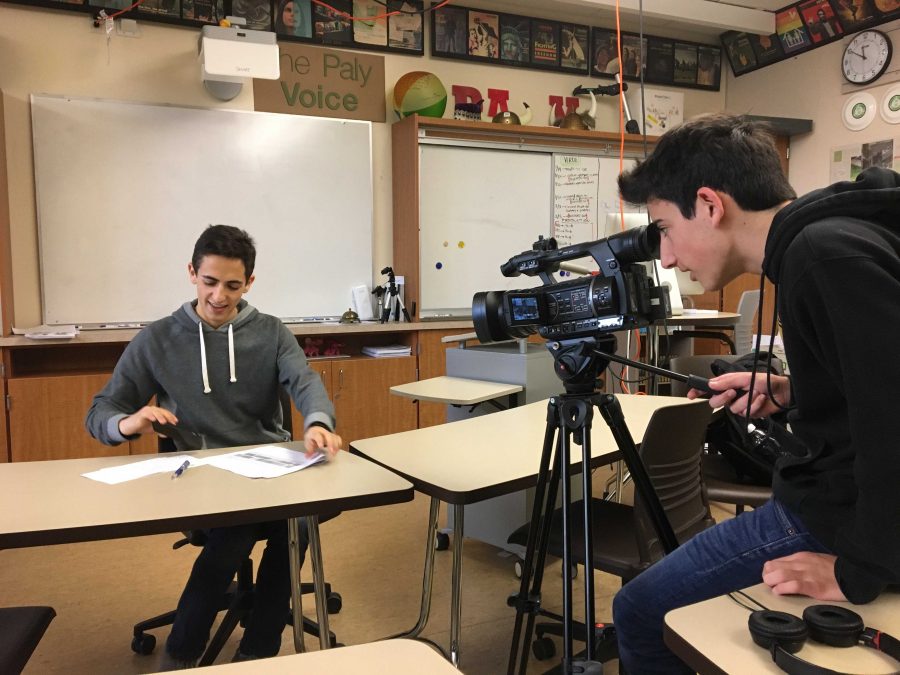 Junior David Foster, a coordinator for the community outreach subcommittee of the Innovative Schedule Committee, speaks to several members of Palo Alto High School's media program as the committee continues to deliberate. "The committee includes Ms. Diorio, some teachers and staff, parents and students," Foster said.

Palo Alto High School’s Innovative Schedule Committee members hope to propose a new bell schedule next month after selecting a preliminary design for a schedule that will maintain odd and even days while eliminating the C-day format.

“During our full-day retreat, the committee considered and narrowed down ten proposed schedule designs to select one schedule design that we will use to make a final recommendation moving forward,” Diorio stated in her email.

According to junior David Foster, a coordinator for the community outreach subcommittee of the ISC, the message referred to the committee’s recommendation for a schedule type rather than a finalized schedule.

“In the Schoology post today [Wednesday], there was a little confusion about Flex and Advisory,” Foster said. “Ms. Diorio made the point that it was a schedule type but I think some people didn’t exactly know what is a schedule type. Basically, it’s not the schedule. It’s just the framework for what might be the final schedule.”

Both Foster and Diorio stressed that the final schedule remains unknown, and several aspects, including Flex and Advisory, are still in development.

“According to some of the research we did, it’s actually not great for you to have Tutorial or Flex at the end or beginning of the day, so we put it in the middle of the day in all the schedule types,” Foster said. “That was what our schedule design subcommittee did, but that was just a place to put it.”

Foster said the schedule is expected to be finalized on Feb. 20 with the school board, as the committee requires a consensus to move forward. Foster predicts that the meeting will go smoothly.

“They [school board members] know that we’ve been working for a very long time on this and putting a lot of time and energy in,” Foster said. “And with the schedule proposal that might come to be out of this, there isn’t anything really radical at all.”

According to Foster, the new schedule will likely be implemented in the upcoming 2018-2019 school year.

Foster said the revised schedule will aim to take student preferences into account by incorporating uniform start and end times as well as continuing the Flex program.

“When we talked to students, there was a lot about consistency of end times and start times,” Foster said. “Students actually really value Flex. I know there have been a lot of changes to Tutorial and all that, but people really find value in it.”

Foster added that many parents have expressed support for the implementation of a later school start time in the new schedule.

“There’s lots of different ways students could have a late start … but of course that affects end time and you really have to look at both sides of the equation,” Foster said. “That’s still being decided.”

Despite the committee’s efforts to take student opinions into account, some students have reservations about the new schedule.

“I think that the proposed schedule … causes students with even days to have the unfair advantage of either an entire weekend or an entire weekend and a day to study for an exam,” junior Ria Vora said. “Let’s say for Analysis [Honors] we had seven days of learning a unit and our test was on the eighth day, and let’s say Analysis had a seventh period and a sixth period. The seventh period class would take the test, and then the sixth period class would get an entire extra weekend to study.”

“We actually started the retreat by looking at the results of the student forums, if you guys remember those, and we had some staff meetings and then parent focus groups,” Foster said. “Then, we looked at the goals for the committee and what schedules would be best and we slowly cut them down.”

In her message, Diorio urged students with questions, comments or concerns to contact the committee at [email protected]