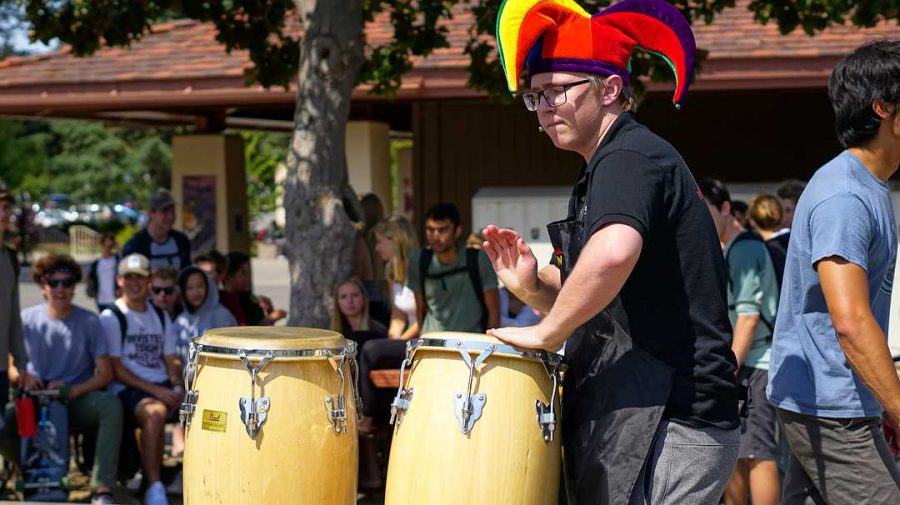 After the success of Quadchella, Palo Alto High School’s Associated Student Body will introduce another music festival, Quadglobe, during lunch on the quad this week with student performances, dress-up days, and themed activities.

Students can expect the event to be similar to last semester’s Quadchella, with a few new additions, according to Shannon Zhao, an ASB social commissioner.

“Quadglobe is basically the same thing as Quadchella, it’s just a different name because it’s a different season,” Zhao said. “Students can still expect to see the same amount of amazing student performers.”

Quadglobe will include dress-up days, as well, and students are encouraged to dress according to the themes: cozy Monday morning (pajamas), green (seniors wear camouflage) on Tuesday, neon on Wednesday, snowed in (white out) on Thursday, and Snowglobe outfits on Friday.

Performances are set to take place in front of the Student Center as construction on the new deck continues.

The line-up features seven musical performances and one dance to be performed by Paly’s K-pop club.

“There will be a lot of returning bands from Quadchella that will be performing again during Quadglobe, so I’m super excited to see those,” Zhao said.

Junior Gil Weissman is a bassist in the band “Romaine” and previously participated in Quadchella. “Quadchella was a great way to get student musicians and performers an opportunity to perform in front of their classmates in a low-stress environment,” Weissman said. “Adding more events like these, such as Quadglobe, helps more students get a chance to perform, and creates a fun mood on campus all around.”
Seniors Kelsey Lu and Lia Straight will also take the stage. “I’m pretty excited,” Straight said. “I’m also kind of nervous because Kelsey is performing with me and she’s just an amazing singer.”

Other performances include: Luke Mulani and Paly K-pop on Monday, Oscar’s Band along with Lu and Straight on Tuesday, Miles’ Garage and It’s a Real Fire! on Wednesday, Romaine on Thursday, and Plastic Flowers on Friday.

ASB hopes to establish a precedent with Quadglobe and Quadchella to create a series of music festivals.

More information can be found on the ASB Facebook page.