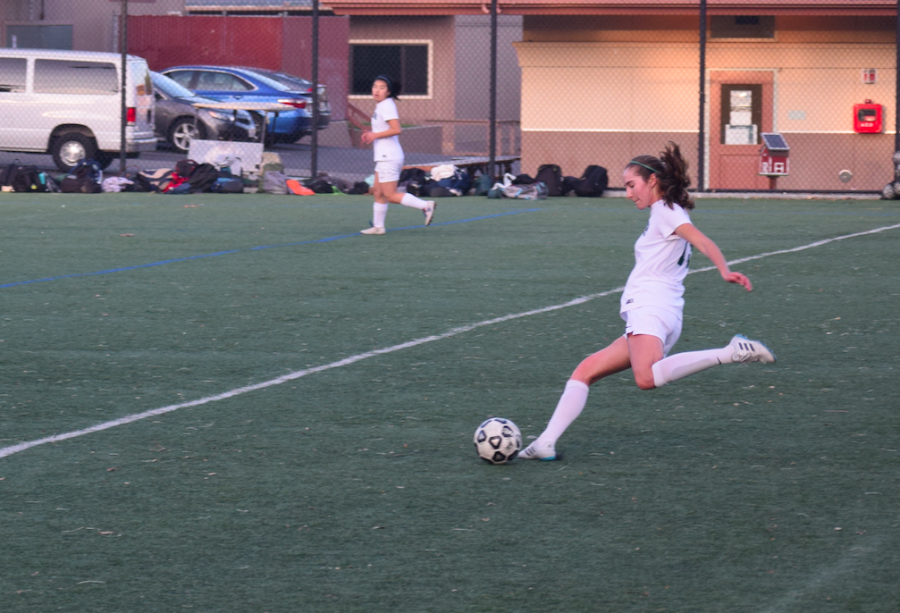 Senior defender Isabella Bonomi prepares for a pass in the game against Santa Clara High School last Friday Jan. 12 at home. The Vikings took advantage of their corner and free kick skills and dominated over Santa Clara. Photo: Samantha McBride

Paly looks to secure the win against Los Gatos  to prepare for its toughest league matchup, against the Mountain View Spartans (11-0-0, 3-0-0), next week.

According to senior defender Isabella Bonomi, the team needs to play with determination and stay mentally focused.

“One of the main things that the team is trying to continue to work on is not going into the game thinking about whether or not the team is good or bad,” Bonomi said.  “A lot of the time, we will start off the game well but then start playing down at the level of the other team instead of keeping the intensity up. Our mentality should be focusing on our game and playing the best that we can, not looking at other teams scores and comparing it to ourselves.”

The Vikings are led by senior midfielder Emily Tomz, who has seven goals on the season. Senior defenders Ally Scheve and Bonomi have recorded six and five assists, respectively.

The Vikings are prepared to strengthen their offense to challenge Los Gatos’ strong defense.

“In the past we’ve known them to be a physical team, so we’ll come in ready to play against that,” Tomz said. “Our defensive line has been looking very strong, our midfield is starting to switch the ball around the field more, and our forwards are making runs and scoring goals.”

The Vikings kicked off their season with a strong record, only dropping two non-league games, including a 1-0 loss to Archbishop Mitty (10-1-1, 3-0-0) out of the infamous West Catholic League.

Following the Vikings next matchup will be against the Spartans at 3:30 p.m. Jan. 24 at Mountain View High School.