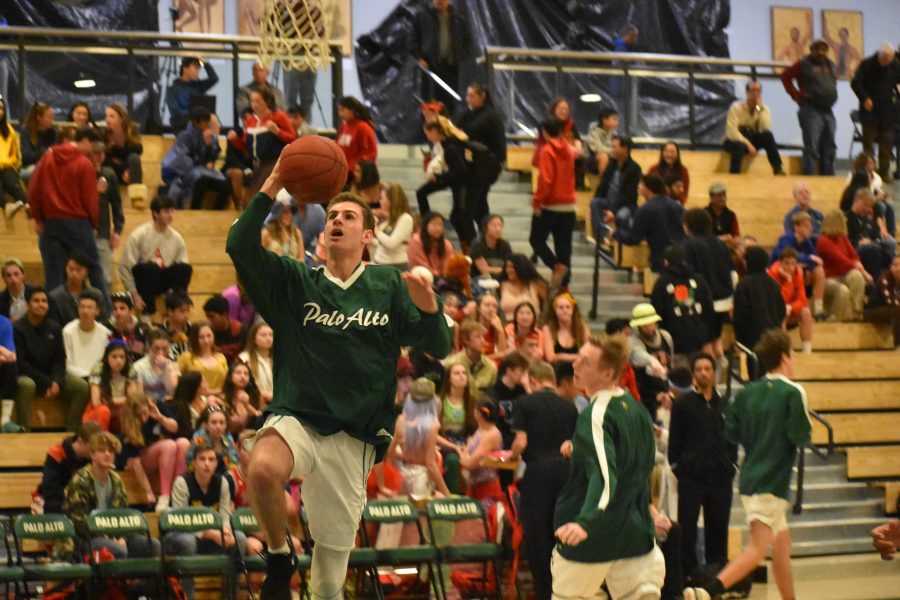 Senior guard Spencer Rojahn shoots a layup in warmups against Gunn on Saturday in the Peery Family center. Paly separated themselves from Gunn in second quarter and didn't look back, however, senior forward William Schlemmer says the team could have played much better. "I don’t think anyone on the team felt super good about the win," Schlemmer said. "We didn’t play very well and we definitely wanted to play a better game in front of such a big crowd." Photo: Benner Mullin

Heavy underdogs heading into Saturday’s matchup against Paly (12-2, 3-0), the Gunn High School Titans (5-8, 2-0) played stout defense and methodical offense to keep the game close, before losing, 56-40, in the inaugural rivalry game of the Peery Family Center.

The Titans swarmed the ball on defense throughout the game, and created a number of extra possessions off turnovers in the first quarter, keeping the game within one score, 10-8.

“I coached them [Paly players] in 6th grade so I knew a lot of those guys and what their strengths and weaknesses were,” Williams said. “My philosophy is try to take guys’ strengths away and have them beat you with their second best skill set rather than their best skill set.”

Gunn was effective in taking Palo Alto out of their offensive rhythm all game, as the Vikings struggled to find their shot and were held under 60 points for the first time during their ten game winning streak.

Paly cut down on its own turnovers and created some on the defensive end in the second quarter, extending its lead to 10 points at halftime, 25-15.

Contrary to the third quarters of Paly’s two earlier losses this season, the boys turned up the intensity coming out of halftime, executing on offense and locking up on defense. Paly’s lead ballooned to over 20 points before it settled at 19 points at the end of the third quarter, 43-24.

“We knew we were better than they are but at half, we didn’t feel like we had demonstrated it so I think everyone wanted to prove that they couldn’t hang with us,” senior forward William Schlemmer said.

The final quarter was more of the same, and Palo Alto led comfortably all quarter until the buzzer sounded a Viking victory, 56-40.

With the boys’ win, Paly secured a 5-0 sweep of quad night.

Despite dominating performances from all five of Paly’s basketball teams, Schlemmer and the boys say they are not entirely satisfied with their result.

“It’s fun getting the sweep but right now we want to focus on playing our best game every time we step on the court and last night we didn’t play our best game,” Schlemmer said.

Up next for Paly is a home game against league opponent Homestead High School (6-9, 1-2) Wed. 7 p.m. at the Peery Family Center.