Shutting down gradebooks during Winter Break helps shut down stress 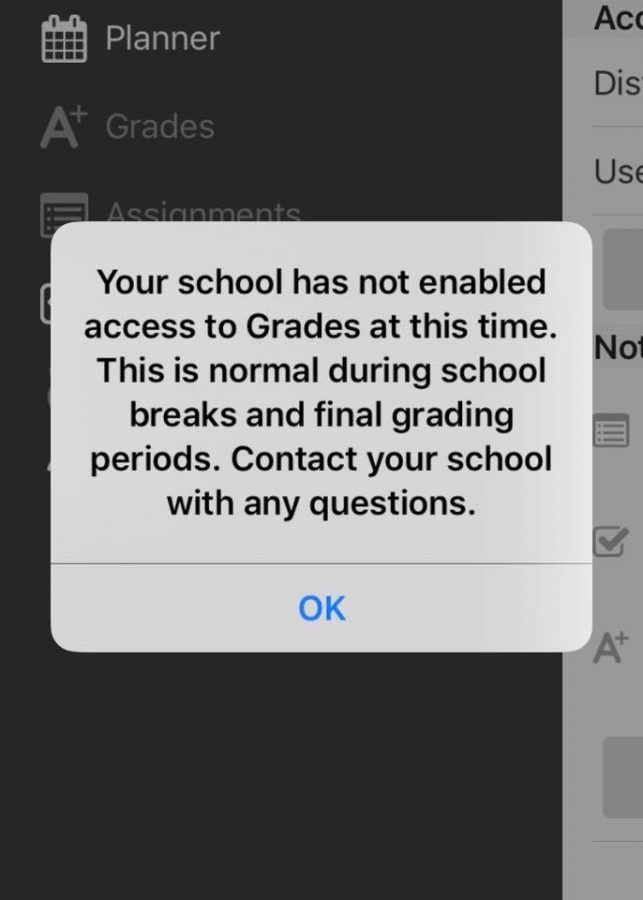 When I first tried to log in to my Infinite Campus account in the school on Dec. 21, I was puzzled to find that my access to the gradebook was blocked. Confused, I reached out to my friends, expecting that it was a simple mistake.

After finding out that the gradebook was blocked for them as well, my frustration and annoyance began.

I angrily told my friends that I needed to check my grade: I had borderline grades in multiple classes. How was I supposed to relax over break when I didn’t know what my final grades would be?

From the onset, I thought that the stress and anxiety of not being able to view the gradebook was going to ruin my break.

However, I soon realize that because I no longer had the ability to continuously refresh my grades, I forgot to check them at all. Without the temptation of watching my grades with hawkish attention, I had no choice but to move on and just relax.

Other students had similar experiences. While they initially found the closure of Infinite Campus to be frustrating, they soon realized that once they were no longer able to constantly check grades, they were able to have a less stressful and enjoyable break.

“Because Infinite Campus was down, I knew there was no point in checking it,” Palo Alto High School senior Kendra Wu said. “If Infinite Campus had been open, I know I would have checked it repeatedly, adding to the already large stress of doing college applications.”

Junior Jack Callaghan said, “Originally, I was kind of mad because I thought that not knowing our final grades for a while would be pretty stressful. But as break went on, I realized that it was actually really nice to not have to think about school or grades at all and just relax for a few weeks.”

There is a reason why schools don’t give homework during winter breaks: They don’t want students to do work during a time when they are supposed to be relaxing. The very basis for having breaks is so that everyone, both students and adults, have the opportunity to step away from their work. Creating time when you are not constantly stressing out about work or school is essential to one’s mental health.

Closing Infinite Campus’s gradebook does just that: It removes a point of anxiety for students so that they can have some downtime.

“I think that it [closing of the gradebook] is a benefit for students because it’s a signal to say ‘this is your vacation, it’s shutdown time,’” Spanish teacher Kevin Duffy said. “You need to detach and relax and enjoy yourself and not worry about your grade right now. Enjoy yourself, have family time, time with friends.”

It is also important to note that this policy closing student access to the gradebook not only positively impact students, but also teachers. After months of teaching multiple classes, coming up with class and test materials, grading essays and tests, winter break is also a time for teachers to relax. We shouldn’t expect teachers to sacrifice their precious rest time for our perceived needs.

Many students claim that it is more stressful to not know their grades, and that this stress impedes them from having fun. This is the very mentality that these kinds of policies should aim to counter. Have we become so intrinsically tied to our grades that we cannot go one moment without thinking about them? Maybe we have, and maybe that’s why this policy should exist: to break that toxic bond.

There were certainly technical problems when the administration closed the gradebooks, such as students still receiving notifications each time teachers posted grades but not being able to view them. But those problems still don’t take away from the intentions and the importance of creating an environment that allows students to forget about school, grades, and grade-point averages for at least the break.

As Duffy put it, the closure of Infinite Campus gradebook is very similar to our dependence on electronics.

“It’s like cellphones,” he said. “Sometimes you need to put it away, [and] not touch it. If it’s out of sight, it’s not a temptation.”

The closing of the gradebook certainly doesn’t solve all the problems related to stress; it doesn’t even scratch the surface. But there is no one panacea. Rather, there are various things that both students and administrators can do to cultivate an environment that discourages the culture of perpetual stress.

After five months constantly fretting over tests and quizzes, Winter Break is your chance to spend two weeks without any of that. You are allowed to relax and just forget about school and grades. Trust me, you have deserved it.

Check out the other perspective on this issue here.