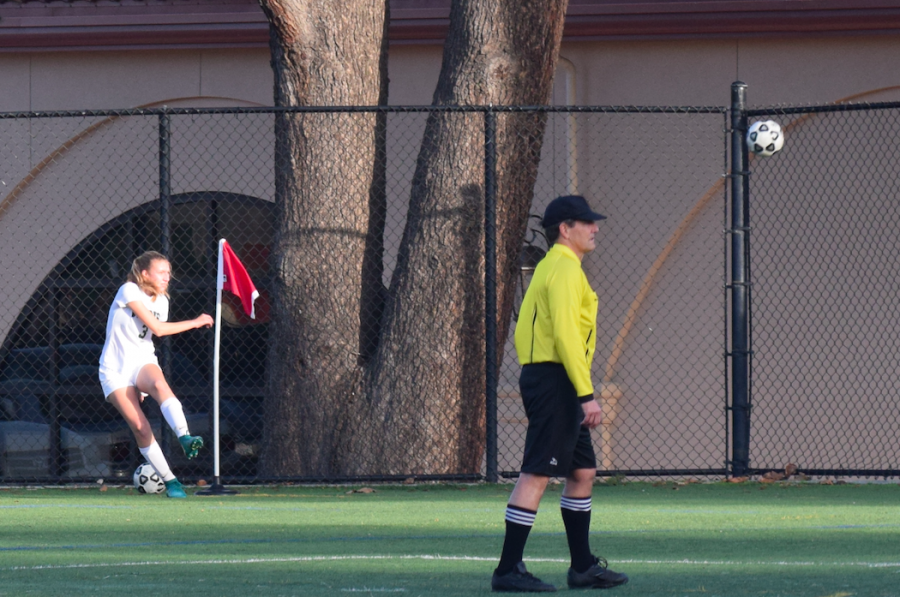 Senior defender Ally Scheve makes a free kick to the goal against Santa Clara High School on Friday at Palo Alto High School. Scheve had three assists, all of which were from free kicks. "I think we did a really good job possessing and working it through the back," Scheve said. "I thought our center backs, [junior] Lindsay North and [senior defender] Bella [Bonomi] did a good job and the team, overall, played our best game." Photo: Samantha McBride.

Viking dominance was on display early in the first half when junior midfielder Leela Srinivasan scored off senior defender Ally Scheve’s corner kick. A second goal was made by senior midfielder and captain Emily Tomz, who also saw an opportunity to score off Scheve’s second corner kick.

According to Scheve, the Vikings’ victory was a result of their strong corner kick skills.

The Vikings’ offense pushed harder toward the goal in the second half of the game with two more powerful corner kicks from senior defender Isabella Bonomi and Scheve, as well as strong offense from Tomz. Sophomore midfielder Ivory Tang started the second half with a strong kick from the quarterline, followed by a score from Tomz who dribbled down the field and scored. The last two goals also resulted from Bonomi and Scheve’s corner kicks.

Tomz, who led the offense with three goals, two assisted by corner kicks, says that scoring from a corner kick is just pure luck.

“There’s a quote I heard from Jacey Pederson [who graduated in 2016] and it was ‘put yourself in the right position to get lucky.’ A lot of those [corner kicks] were just luck, just in the right spot and the right time,” Tomz said. “Of course, Ally [Scheve] and Bella [Bonomi] are amazing corner kickers.”