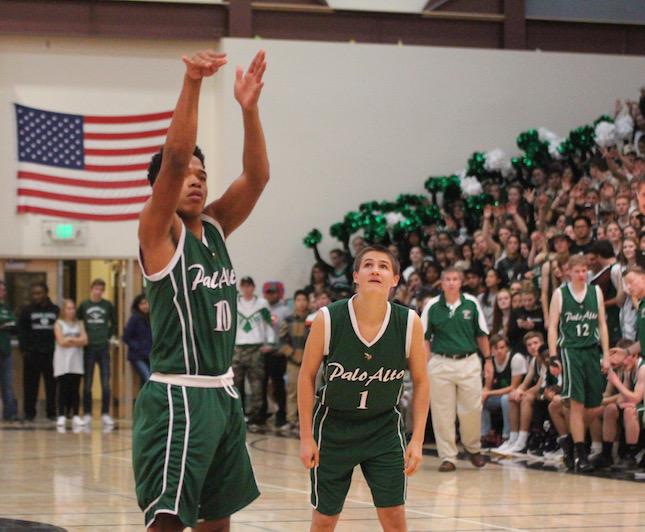 Senior guard Paul Jackson takes a free throw at Gunn while the Paly student section looks on. Palo Alto went onto win the game comfortably, 80-50. Diepenbrock says the rivalry stakes of playing Gunn won't affect Paly's gameplan. "We will just treat this game like we treat all of our other games and just focus on ourselves and what we are trying to do to play better," Diepenbrock said. Photo: Maya Rueven

Last basketball season could not have been more different for Paly (10-2, 2-0) and Gunn High School (5-7, 2-0). The Vikings found extreme success, winning 26 games and advancing deep into the postseason, while the Titans struggled to find their footing all year and were relegated to the El Camino Division.

This year, however, Gunn head coach Brandynn Williams says things will be different.

“We are preparing by trying to practice every day, one day at a time, one game at a time,” Williams said. “Just work hard, the fundamentals, do the right thing … stay in the moment don’t get too high on the wins don’t get too low on the losses, stay right in the middle even keel. I think the team that makes the least mistakes will probably win.”

Paly comes into Saturday on a nine-game winning streak, all games decided by 15 or more points, with five different leading scorers between those nine games.

The Vikings are confident heading into Saturday and after two 30-plus point victories over Gunn last season, head coach Peter Diepenbrock says they just need to stick to their gameplan.

“I’m not sure there is much we can do to prevent overconfidence going into this game,” Diepenbrock said. “We will just treat this game like we treat all of our other games and just focus on ourselves and what we are trying to do to play better.”

Gunn comes into Saturday’s matchup with nothing to lose and Williams says his team’s philosophy will be one of team basketball.

“There’s no I in team … I like ‘we guys’, not ‘me guys’,” Williams said. “A me person is all about that person, me me me. A we person is about the team, us. It’s not one person. It’s more of a team. If we just do the fundamental things and play as a good group and unit hopefully we’ll just try to do our best.”

The rivals square off at 6 p.m. Saturday at the Peery Family Center for their only matchup this year.