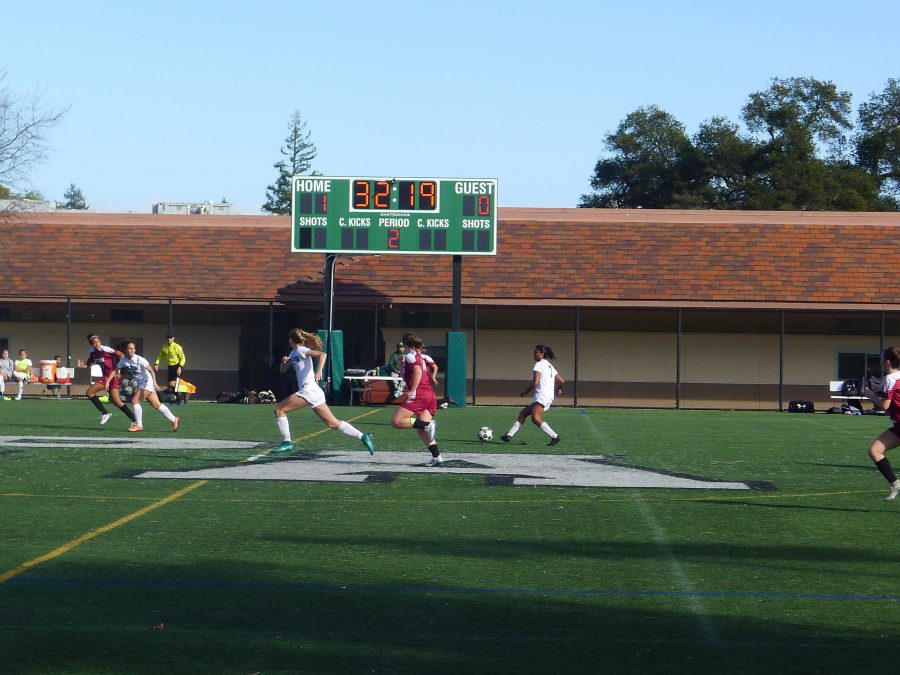 Junior middle fielder, Leela Srinivasan dribbles down the field and assists senior Ally Scheve for the Vikings' second goal of the game against Sacred Heart Preparatory on Saturday at Palo Alto High School. "We got a strong result and it was great to see four different players each get a goal," Srinivasan said. "I'm hoping this will will help boost our team confidence and spirits for the rest of the season."

After beginning the league season with a 4-0-0 record, the Palo Alto High School girls’ soccer team (5-2-0) fell in two straight games at the end of the semester. On Saturday, however, the Vikings rebuilt their confidence by defeating Sacred Heart Preparatory (1-7-0), 4-0, in a regular season game at Palo Alto High School.

The Vikings struck early in the first half, when senior Isabella Bonomi shot a corner kick directly at sophomore Frida Rivera, who then headed the ball directly into the goal. The Viking defense, led by senior defensive specialist Ally Scheve held strong throughout the game and scared Sacred Heart.

“It was great to have a game where we were able to score a good number of goals by four different players,” Scheve said. “I thought everyone played great today and we were able to work on possessing the ball most of the game and having a good combination.”

The Vikings’ continued to push a strong offense in the second half when Srinivasan passed the ball from the half line to Scheve, who dribbled down the field and scored in the top right corner of the goal. A few minutes later, Scheve assisted Tomz in another goal, followed by a final goal by junior Venus Sandoval.

Not only did the Vikings show stellar offense, junior goalkeeper Kaitlin Hanay made five saves, preventing the Gators from scoring a single goal.

“We did a really good job defending throughout the game,” Hanay said. “There were a few times that we struggled, especially during the second half but. But in the end, it all worked out and we were able to keep the other team scoreless.”

According to senior middle fielder Emily Tomz, the Vikings’ losing streak prior to the Sacred Heart game was because of strategical mistakes. “We weren’t able to keep as much possession as we would have liked and we weren’t connected as a unit,” Tomz said. “There was too much space between the defenders, midfielders, and forwards, and [they] were able to go into that space and create dangerous chances.”