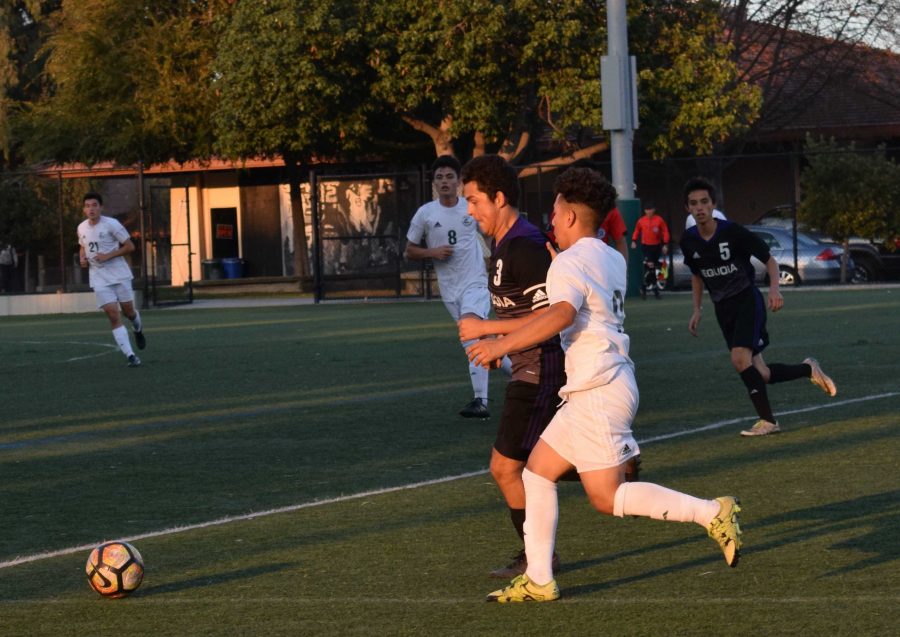 Junior Marco Tan dribbles past a defender and goes on to score the only goal of the game against Sequoia High School. “This was my first goal of the season," Tan said. "I had a few last year and it took four or five games to get back this year.”

The Palo Alto High School boys soccer (5-1-0) team will face off against Junipero Serra High School (3-0-0) at 3:30 p.m. this Thursday at the Viking lacrosse field.

The Vikings are going into the game after a 1-0 win against Sequoia High School on Monday despite an average performance.

“We struggled a bit against Sequoia and fell flat after scoring early,” senior captain defender Matt Knowles said. “This is not the way we want to play, and our coach made that clear to us.”

Paly has not played against Serra in more than four years, so the game is expected to provide the current team with a new challenge against a new team.

“I’m expecting them to be very competitive as their school has a history of being good at sports,” senior goalie Kiran Misner said.

“The biggest challenge is going to be attacking effectively and making the most of our chances,” Misner said. “We’ve done well defensively by not conceding that many goals and the work rate has been pretty high.”

According to Knowles, the team took a day off from practice to conserve energy for tomorrow’s game.

“To prepare for the game, we took a rest day from training since we have played everyday for the past few weeks excluding Sundays,” Knowles said.  “We hope that this will allow us to be fit and fresh for the game.”

Although tomorrow’s game might be difficult, Misner is optimistic for Paly’s performance.

“I’m expecting us to be very solid tomorrow, even if Serra is very good,” Misner said.