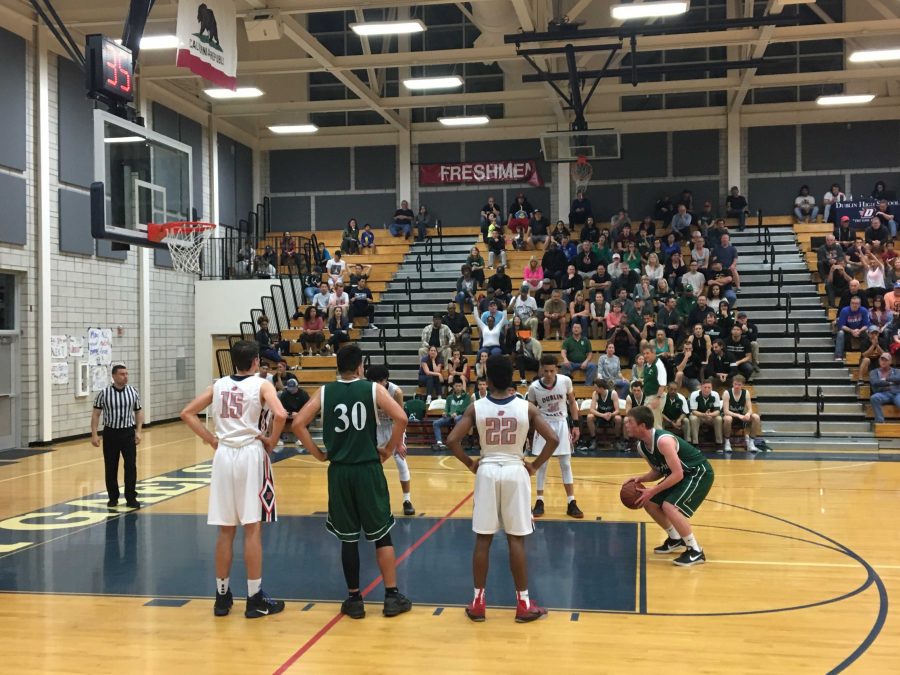 Heavy underdogs, the Vikings marched into the Dublin High School gym and exploded out of the gate. Junior guard Will Schmutz capped off an energized first quarter for the Vikings with a heave from beyond halfcourt that swished through the hoop at the buzzer to extend the Paly lead to 26-18.

“I got the rebound and dribbled past a guy and saw the big guy coming,” Schmutz said. “So I just tried to get it high in the air and luckily it went in.”

The second quarter was the same story, as the Vikings continued to outplay, out hustle, and out-execute the Gaels, pushing their lead to 12 points at the half, 47-35.

Dublin opened the second half with energy and quickly closed the gap between the sides, coming within five points with two minutes to play in the third quarter. However, the Vikings, determined to secure a semi-final berth, fought back and took a nine-point advantage into the final period.

Palo Alto caught a break early in the fourth quarter when University of Montana-bound senior point guard Timmy Falls of Dublin fouled out of the contest.

The Vikings hung on throughout the final period and led by ten points with around two minutes left to play. The ten-point lead almost proved to not be enough, as the Gaels roared back in the final minutes of play, cutting the Palo Alto lead to two points with just 2.0 seconds left.

“I think we were able to hang on because we have played some very good teams this year and we have improved throughout the season,” Palo Alto head coach Peter Diepenbrock said.

Senior guard Miles Tention, who totaled 17 points, five rebounds, and four assists, hit the first free-throw and missed the second into the arms of Dublin player Robby Beasley, the game’s high scorer, with 25 points, whose full-court heave missed everything.

Palo Alto faithful erupted into jubilant cheers and ran onto the court to celebrate with the team, who advanced to the semi-final of the NorCal bracket.

Critical to underdog Vikings’ success was ball security. Dublin pressed Paly high and often, but the Vikings were composed with the ball and broke the vigorous press with ease, which led to transition layups.

Dorward believes the win over Dublin will give the Vikings more confidence going forward.

“It was a great upset and with this win we know we can compete with any team and continue to win,” Dorward said. “We knew they liked to play fast and had to limit their transition points. On the offensive side, we knew we had to attack the basket because they didn’t play that much help defense.”

Diepenbrock is confident in the team’s ability to continue their strong play against a gritty St. Mary’s team.

“We have played several teams similar to St. Mary’s like Cupertino and Los Gatos,” Diepenbrock said. “So we should be ready to play that style.”

Palo Alto heads out to Stockton on Tuesday to face the No. 5-seeded St. Mary’s Rams (21-11, 8-2) at 7 p.m. in the Division I CIF State Boys Basketball Championships.