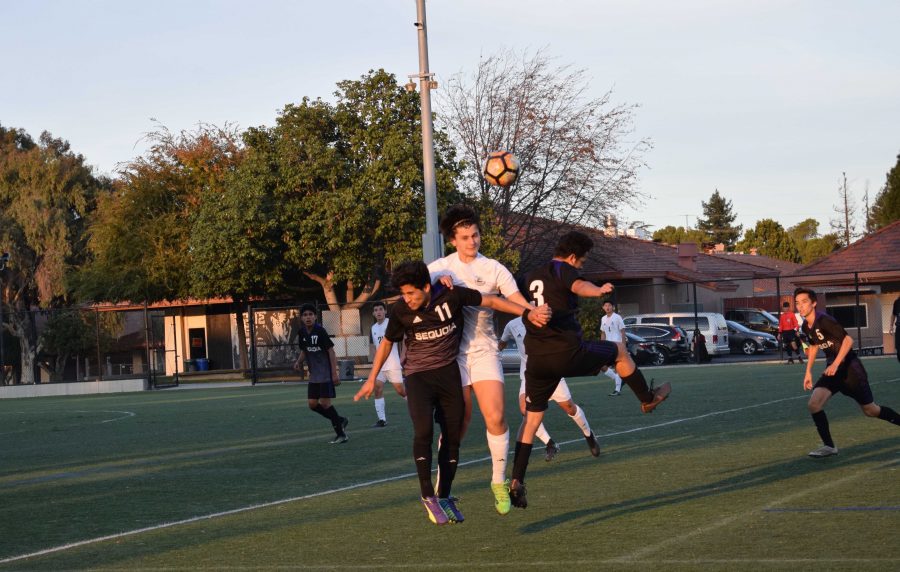 Senior Victor Magnussen heads the ball while blocking a Sequoia player during a game against Sequoia High School resulting in a Paly possession. Photo: Ankita Amberkar

Although this game resulted in a win for Paly, coach Don Briggs says there is still much room for improvement.

“We played 24 seconds really well,” Briggs said.  “The rest of the time we played okay.  We were having trouble controlling the ball and we were kind of forcing passes.  I don’t think it was one of our best efforts, but we got a win out of it so it’s okay.”

Junior Marco Tan scored the only goal of the game early on in the first half. Tan received a pass from teammate junior Isaiah Schoenberger, collected the ball, and slotted it past the Sequoia goalkeeper.

“Isaiah passed it to me and I just hit it,” Tan said.  “This was my first goal of the season.  I had a few last year and it took four or five games to get back this year.”

Overall, the game was a fast-paced exchange of possession with many near misses by from Sequoia, blocked by Paly goalies senior Kiran Misner and sophomore Jackson Druker.

“I thought it was good because we didn’t concede from the back and we scored an early goal,” Misner said. “I defended well the whole game so it wasn’t too bad.”

The Vikings will face Junipero Serra High School (3-0-0) at 3:30 p.m. Thursday at the Paly lacrosse field.