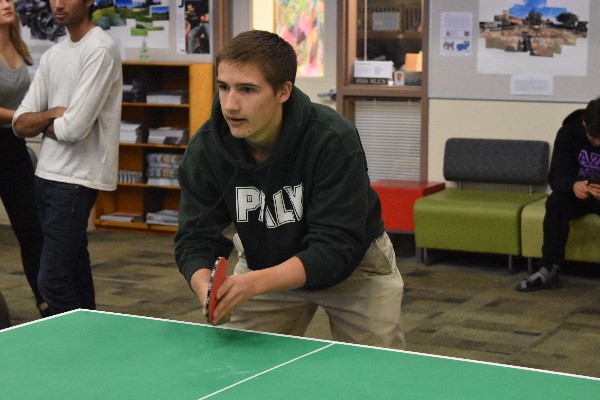 Senior Will Schmutz prepares to face off against his opponent during the first round of the tournament on Monday. Photo: Benjamin Huang

Tensions were high during lunch on Friday in the Media Arts Center as two teams of two players faced off against each other in a ping pong game with two $20 gift cards to Chipotle on the line.

At the climax of the game, one of the players, Aaron Gao, hit the ball too hard. The ball flew over the table without touching the other side and instantly decided the outcome of the game. The two players on the other team, seniors Kasra Orumchian and Will Schmutz, embraced each other in jubilation at their 15-9 victory over their opponents, juniors Aaron Gao and senior Preston Sterling.

“There was a lot of good competition, but I’m really happy that Kasra and I pulled it off and got the $20,” Schmutz said.

“I feel like I did pretty well,” Gao said. “I had some good control of the ball. …It was a pretty tight matchup, I was very nervous.”

The championship match was the culmination of the Associated Student Body intramural ping pong tournament, held from Monday to Friday during the lunch period in the MAC.

After the first round, which spanned Monday and Tuesday, the remaining 16 teams out of the original 32 advanced to the quarterfinals on Wednesday. By the semifinals on Thursday, all but seven teams had been eliminated. From those seven, only three teams, Cox and Aguila; Orumchian and Schmutz; and Gao and Sterling advanced to the final round.

Gao, despite finishing in second place, said the tournament was still a fun experience.

“This year I see great improvement,” Gao said. “Things are getting bigger, more and more people are coming in to the tournament. I love it.”