Library on schedule to open in early 2019 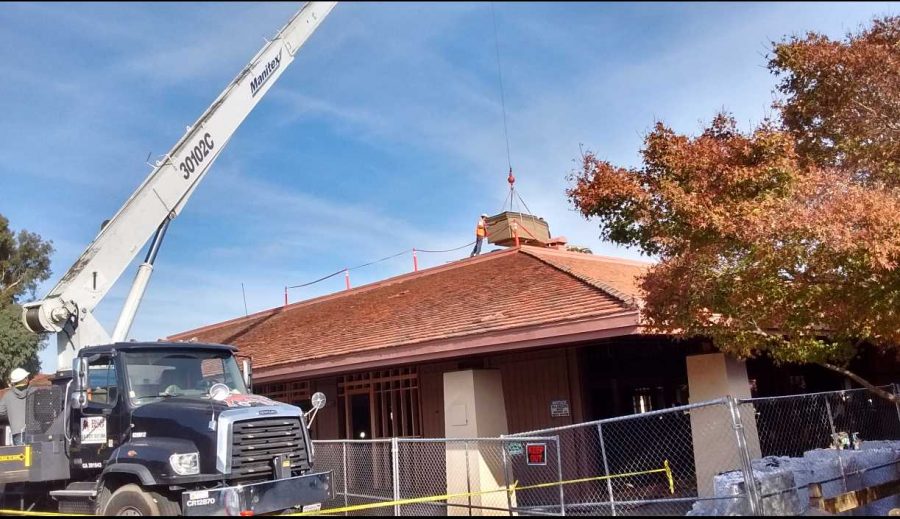 Construction workers bring a large crane vehicle on campus to assist with waterproofing the library roof. As more areas seem to be fenced off, students say they find numerous inconveniences in transitioning between classes. "I personally think that the smell is awful and could be even unhealthy," junior Adam Chabane said. "Some of the noises are very loud in the mornings and I can see how they could disrupt learning in buildings near the construction." Photo: Eric Yap

As the library renovation continues to take place on the Palo Alto High School campus, students are finding scenes of interior improvements for the “wall-less” school library and vehicles such as cranes on campus.

In addition to the many areas of campus sealed off for construction, the space across from the Student Support Services portable was temporarily fenced off for a large crane vehicle to stay for the day on Dec. 1 .

According to Assistant Principal Jerry Berkson, the purpose of the crane was to provide efficient equipment transportation support and assistance for construction workers working on the roof.

“That [the crane] was for making sealing and waterproofing the library roof easier,” Berkson said.

The roofing constructions on the library have also created foul smells on campus, according to sophomore Dara Heydarpour.

“You can smell it from the computer science building and it constantly comes around in the morning,” Heydarpour said. “I feel the smell is very strong in the robotics classroom.”

While many students also note that there is a backlog of other students transitioning between classes surrounding the cramped fenced-off area between the World Language and Social Science buildings, the seemingly empty sealed area actually is intended as a set-up area for the construction, Berkson said.

“Between the 400s and 800s buildings where the parking lot is, the area is for the construction workers and where they receive all their equipment from,” Berkson explained. “The fenced off area is so kids won’t be walking back and forth while huge beams and other equipments are being transported.

Unfortunately, for current seniors, the newly renovated library only will be available somewhere in the beginning of 2019, after they graduate. According to librarian Rachel Kellerman, the new building is on track with its  18-month project plan.

“We are keeping track of the approximate date of the completion of the library, and so far, it should, give or take, be a couple of weeks from our expected finish,” Kellerman explained. “That best case could probably extend to spring break [2018] if possible.”

Many students have also expressed their excitement about the new building’s opening and the availability of advanced resources.

“I definitely look forward to the new library building,” Heydarpour added. “I would think that the environment for studying would be a lot more improved.”