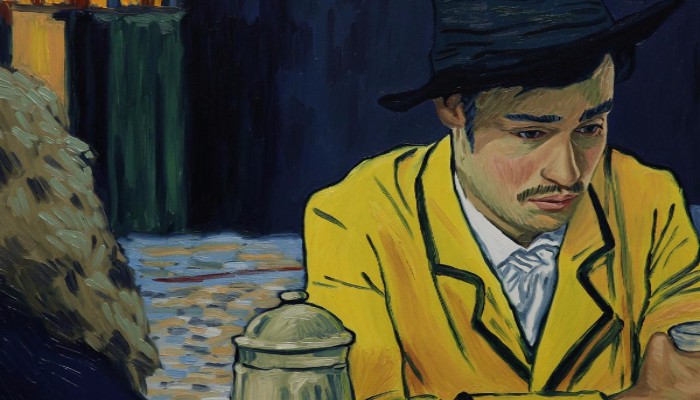 “Loving Vincent,” the product of six years of toil by directors Dorota Kobiela and Hugh Welchman, is a film that aspires to go down in history as a landmark in visuals: It is the first film in history to be animated entirely in oil paintings, each painting painstakingly rendered in Vincent Van Gogh’s distinctive style.

However, the top marks it receives in its visual style are somewhat offset by a plot that drags on and fails to give the audience a sense of closure.

According to the “Loving Vincent” movie website, 126 painters created 65,000 oil paintings, each constituting a single frame. The painters used a technique in which they would paint the first frame of a shot on a canvas, and then paint the second frame on the same canvas, and so on, until the final frame of the shot formed the top layer of the canvas.

The end result is spectacular. Every frame is a feast for the eyes; the fact that the entire movie is done in Van Gogh’s style of broad brushstrokes and vibrant oil paint colors makes you feel as if you are inside the troubled artist’s mind, perceiving the world the way he did. And due to minute differences in the paintings from frame to frame — for example, a shade of blue in one frame shifted slightly to the right in the next — everything in the frame is in a constant state of motion that exudes energy and life. Stars “vibrate” and radiate lines of light. The sky is a constant churning of whites, blues, and blacks, above wheat fields that swirl and twist in the wind.

These beautiful visuals are accentuated by Clint Mansell’s orchestral score, whose sweeping violins add a compelling and at times somber note to the film.

The film tells the story of a young man named Armand Roulin (voiced by Douglas Booth), whose father, mail carrier Joseph Roulin (Chris O’Dowd) asks him to personally deliver a letter by the late Vincent Van Gogh (Robert Gulaczyk), now dead for a year, to Van Gogh’s brother Theo. Upon traveling to the town in the countryside where Van Gogh spent his final months, he becomes interested, and then fixated, on the circumstances surrounding the artist’s death. Along the way he meets a colorful cast of characters that include Adeline Ravoux (Eleanor Tomlinson), Doctor Paul Gachet (Jerome Flynn), The Boatman (Aidan Turner), and Marguerite Gachet (Saoirse Ronan).

Most of the recurring characters in the movie are well-developed and nuanced. As Roulin questions the people in the countryside again and again, it becomes clear that all of them remember the troubled artist and the circumstances surrounding his death differently, and Roulin must determine what really happened. For example, Doctor Paul Gachet is initially painted as an unpleasant man who did nothing to help a dying Van Gogh. But upon talking to him in person near the climax of the movie, he is revealed to be a kind soul, guilt-ridden over his belief that he was personally responsible for the artist’s death.

The duality of Van Gogh was one of the aspects of the plot of “Loving Vincent” that the directors executed masterfully. From the beginning of the movie, Roulin’s encounters with other characters help cement two very different Van Goghs in the viewer’s mind: one as a poor artist, misunderstood and bullied by those who did not understand him, the other as a bitter, angry man whose actions alienated those around him. As each version develops during the progression of the story, the audience questions which is the true Van Gogh. This, and the question of what exactly happened on the day of his death, when midway through the film, one of the characters, Doctor Mazery, posits that Vincent’s death was a murder, not a suicide, keeps the audience eagerly awaiting the next development of the plot.

However, such developments come slowly. Once Roulin arrives in the countryside, the majority of the film after that is filled with what amounts to him traveling to different places and questioning different people who invariably give him vague answers. This middle section of the plot takes up a majority of the runtime, and while it contains some small insights into Van Gogh’s life, it feels dry and vapid. Given such a buildup, the film’s short, seemingly rushed conclusion ultimately fails to give the audience a sense of closure in the end: by the time the viewer has time to absorb what just happened, the closing credits are already appearing onscreen.

Does this mean that “Loving Vincent” is a bad film? Not by a long shot. However, the most important aspect of a movie is the story it tells, and the ability of the story to engage and leave an impression on the audience — other details such as the visuals and the sound design should be secondary in importance, and “Loving Vincent” fails to come through in this crucial aspect. Perhaps the best analogy would for “Loving Vincent” would be a candle flame: a film that dances back and forth in front of the viewer’s eyes like a candle, bright and beautiful but without true substance.