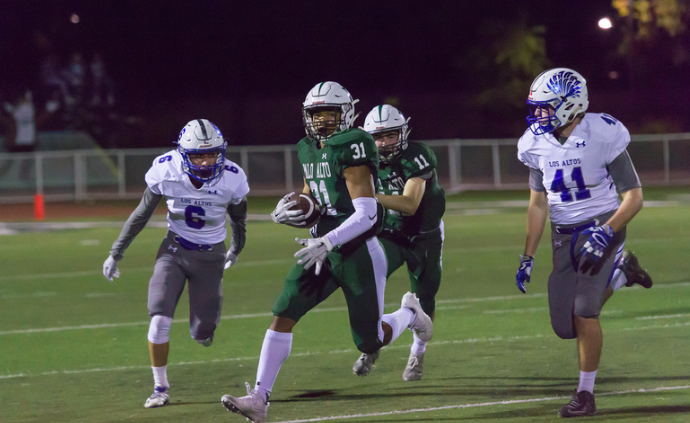 The Palo Alto High School Football team wrapped up its season with an overall record of 3-8 and a league record of 3-3 after a 14-7 loss on Nov. 17 to the Salinas High School Cowboys (10-2, 7-0) in the first round of the Central Coast Section playoffs.

The Vikings kicked off the season with a rocky start, losing its first four non-conference games. But the team turned things around for league, improving to a 3-3 league record, clinching the seventh-seed in the CCS Division I playoffs.

With crucial injuries of key players, many new faces stepped up for Paly.

Star senior running backs Paul Jackson III and Sione Latu were injured in the beginning of the season. Junior quarterback Jackson Chryst left the field in the first quarter of the Vikings’ non-league game against the Aragon Dons (10-2, 4-1), with an achilles injury.

Junior quarterback Kyle Mostofizadeh took over in the absence of Chryst. Mostofizadeh completed seven of 13 passes for 153 passing yards and two touchdowns in the game against Aragon.

Additionally, sophomore wide receiver Jamir Shepard stepped up for the team, with 365 total receiving yards and three receiving touchdowns on the season.

Despite their injuries, Chryst still led the team with 887 yards, on 56 completed passes for eight passing touchdowns and one rushing touchdown. Although Jackson III played in only eight games, he still rushed five touchdowns on 443 yards. Junior running back Aiden Chang put up an impressive 931 rushing yards with 165 carries and four rushing touchdowns.

“Our most improved players were [junior] Wes Walters, Aiden Chang, [junior] David Hickey and [sophomore] Junacio Henley,” Sullivan said. “They happened to impact our team drastically with their ability on the field. Since all of them are underclassmen, we expect them to continue to progress and be the impact players for the 2018 season.”

According to Sullivan, the future of the team was set forth from this years’ graduating seniors.

“Every year the expectation is that the upcoming underclassmen need to take leadership roles that the seniors are leaving behind,” Sullivan said. “If the now juniors and sophomores can do that, then we can get better for the next season.”

According to senior tight end Bryant Jefferson, a highlight of the season included a dominant win over the Los Altos Eagles (2-8, 0-6) on senior night.

“The season had its ups and downs but it was memorable and enjoyed every moment,” Jefferson said. “Definitely winning on senior night was a big highlight of the season.”

“In terms of preparation for next season, it is a matter of how successful the kids want to be,” Sullivan said. “We as a coaching staff have laid out what needs to happen to be a great, not good, team in 2018. It is in their hands now.”

The Vikings look to make a mark next year by starting preparation for the 2018 season soon.