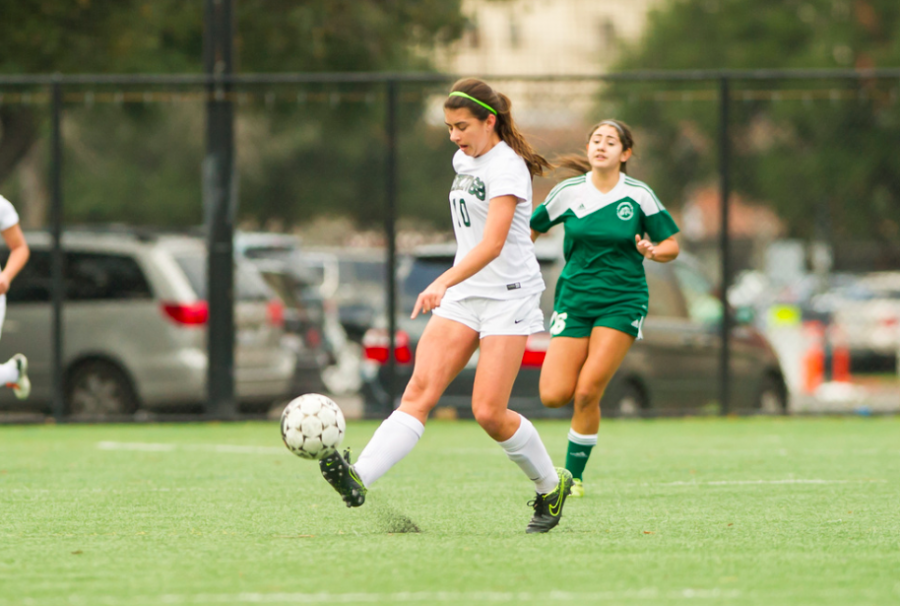 For the past two years, the Palo Alto High School girls’ soccer team has lost in the first round of the Central Coast Section Open Division playoffs, despite placing in the top of the De Anza League.

This year, the Vikings want to break the pattern — spectacularly. With a hefty group of five returning seniors and impressive young talent, the girls are warming up now, with several non-conference games, for their January league debut with their eyes on another De Anza League title and what team members hope will be a deep run into the CCS championships.

The team looks to use its early CCS exits as motivation for this season, according to senior midfielder Emily Tomz.

“Our goals for this season are to first and foremost bond as a team,” Tomz said. “With a lot of new players, we need to adjust to each other’s playing style and learn to move the ball around the field smoothly. We also have the same goals as in previous years: win league, win CCS, and beat Mountain View. Although ambitious, I am confident we have the talent and drive to achieve all three this year.”

Despite the of loss last year’s seniors, including star defender Lauola Amanoni and midfielder Tess Preising, the team must step up into leadership roles, according to Tomz.

“Last year we had a great season, allowing zero goals against us in regular season,” Tomz said. “We have three great goalies this year and a solid back line, so this remains our goal for this season as well. We lost 10 amazing players who made a big impact on the team, but each year we lose players, and each year we come back strong.”

According to senior midfielder Ally Scheve, returning players will have a huge impact to the team.

“We had a great season last year as we went undefeated up until CCS and beat our rival Mountain View which we had been a big goal of ours,” Scheve said. “So this season we definitely want to keep up the winning streak and continue to win big games especially against Mountain View.”

According to Tomz, the team is optimistic about new, incoming players.

“There are many new players coming in this year, and they all look great” Tomz said. “Everyone needs to step up to the plate this year and bring their all, so with the upcoming games I’m excited to see what they and the rest of the team will accomplish.”

Tomz, who has verbally committed apply early and play Division III soccer at Pomona College, led the team with 16 assists last year and will continue to step up as captain for the second year in a row.

Paly won its first game of the season in a preseason matchup against the Aragon Dons (0-0-1, 0-0-0), this Monday at Aragon High School. The Vikings have a tough preseason schedule, with three games against West Catholic Athletic League schools, after this week.